Davison area police agencies, the American Legion Honor Guard and a veteran’s motorcycle group were on hand to escort the remains of Army Corporal Dale Wright from Allen Funeral Home in Davison to the Great Lakes National Cemetery in Holly, Monday morning. Wright’s remains were returned by the North Korean government in 2020 and his DNA was matched to that of his sister Linda Stover of Flint. Wright served as a member of Company C, 1st Battalion, 32nd Infantry regiment, 7th infantry division and was reported missing Dec. 2, 1950. 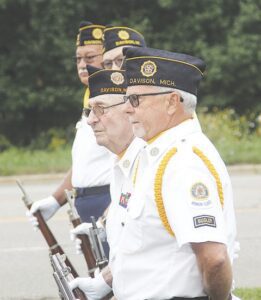