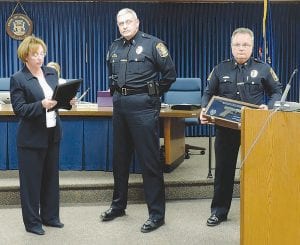 FLINT TWP. — A man who literally and figuratively stands head and shoulders above the rest, Lieutenant Tim Jones is retiring after 31 years with the township police department, effective May 2.

As Field Operations Commander, the 6-foot-8 Jones is frequently a visible presence at crime and accident scenes.

“Personally, I will miss him more than anyone else,” said Police Chief George Sippert, during a recognition ceremony in Jones honor at the township board meeting Monday night.

Jones joined the department as a parttime officer in May 1983, fresh out of the police academy, Chief Sippert said.

The two first worked together on night shift patrol in March 1986. Jones was promoted to sergeant in 1994 and to lieutenant in 2009. Since then, Jones has been Chief Sippert’s right hand. 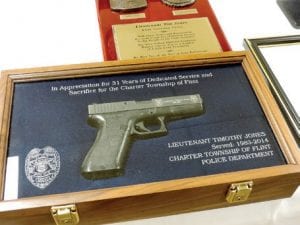 “Tim kept me in line, on track and on task in practically everything,’’ Chief Sippert said. ‘He did so much behind the scenes that people would not know about.”

He worked as a uniform quartermaster most of his career, keeping the quartemaster storage room in tip-top shape. He also served as the public information officer, freeing Sippert from on-camera duties.

“Tim has exceptional organization skills as evident in his office compared to mine,” Chief Sippert joked.

Jones also completed hunderds of hours of education in motor vehicle accident investigation, served as a Fatal Accident Reconstructionist and was recognized as an expert witness.

Jones supervised the Honor Guard and is an instructor at the CS Mott Law Enforcement Regional Training Academy. Jones has been responsible for acquiring many grants including for Underage Drinking Enforcemement.

After his promotion to Lieutenant, Jones was thrust into the role of being the department’s Information Technology expert and rose to the challenge, Chief Sippert said.

Jones also handled inventory, a huge job keeping track of guns, radios, equipment and fleet managemnt and he also took a leading role in obtaining and setting up in-car cameras.

Cheif Sippert also presented Jones with a commorative plaque from himself and three former poice chiefs who all, like Jones, are graduates of the FBI National Academy, an invitation-only professional law enforcement training program in Quantico, Va.

Township Supervisor Karyn Miller, on behalf of the township board, also presented Jones with a proclamation in his honor, citing many of the same accomplishments as Chief Sippert.

Miller suspended the board meeting for 15 minutes for a cake and congratulations reception in Jones honor.

Though retiring from the department, Jones is not retiring from police work. He is moving on to a contracted managerial position with FANG.

“It is time to go and do something different and I am happy,’’ Lt. Jones said.