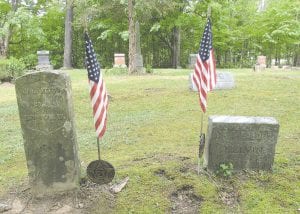 A row of flags wave atop the fence at Cronk Cemetery in Flint Township for the Memorial Day weekend. Flint Township Clerk Kathy Funk said this is the second year the flags, which were provided by Funk and Trustee Tom Klee, have been placed on the fencing at Cronk and Bristol cemeteries in honor of those who gave their lives in service to our country. Funk, who oversees the two cemeteries for Flint Township, said Cronk Cemetery is the resting place for veterans of the Revolutionary and Civil wars. Flags also mark the graves of servicemen. The stone on the left reads John F. Patten, 5th Michigan Cavalry. According to records, he was a private born in 1828. The stone on the left reads Van Buren, Melvin, 1847-1926, 13 Michigan Battery Co. A. According to records, he was a private with the 13 Michigan Light Artillery. 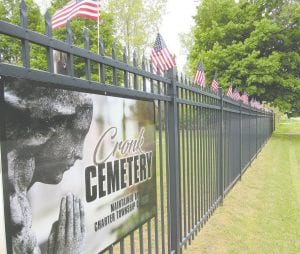