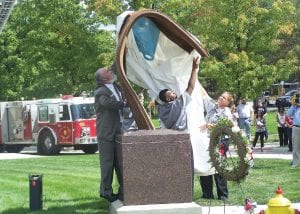 FLINT — Denise Dedman, a Red Cross volunteer, said New Yorkers were shocked to find people outside their city cared about the attack on the World Trade Center there in 2001.

But when they were besieged by more than 50,000 volunteers from around the nation who came to help in the wake of the terrorist attacks, it became clear to them they were not alone.

“This was indeed a global disaster,” said Dedman, addressing the crowd at the dedication of a memorial honoring first responders at Mott Community College on Sept. 11. “It was a global tragedy.”

Dedman was one of the speakers at Mott Community College for the dedication of a memorial featuring a piece of the World Trade Center destroyed on Sept. 11, 2001. It was also an opportunity to honor local police, fire and emergency response professionals.

The piece, a steel beam taken from the building rubble, was presented to MCC by the Port Authority of New York and New Jersey, 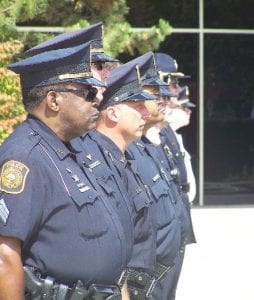 Bottom left, police officers from all over Genesee County stood at attention during the raising of the American flag.

The memorial is located in front of the Prahl Center on the MCC main campus, 1401 East Court St. in Flint.

MCC President Dick Shaink used the opportunity to thank police, fire and first responder personnel for everything they did after the attacks — and still today for protecting people and saving lives.

“These are the brave individuals who ensure the campus and community are safe,” he said. “I’d like to take this opportunity to thank them again.”

Other speakers included Flint Mayor Dane Walling, Flint Police Chief Alvern Lock and Harmes, who called for a moment of silence to honor those lost in the Sept. 11, 2001, attacks on the Pentagon, World Trade Center and the four hijacked airliners used to carry out those attacks.

The monument will remain on display year-round.