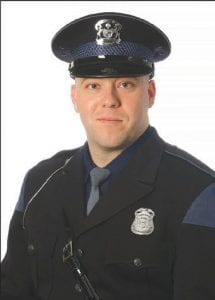 FLINT TWP. — Michigan State Police Trooper Chad H. Wolf of Fenton who died on Friday, August 28 as a result of injuries sustained in a traffic crash, was based at the Flint Township Post from July 2012 to September 2013, according to Mike Shaw, MSP public information officer.

Wolf, 38, enlisted with the MSP in 2008, graduated as a member of the 121st Trooper Recruit School and served at the Jackson, Flint and Metro posts. He joined the Metro Motor Unit based in Taylor in September 2013.

At approximately 6:30 a.m. last Friday morning, Wolf was on patrol with his department-issued motorcycle driving on northbound Dixie Highway crossing over southbound I-75 when a passenger vehicle towing a trailer collided with Wolf’s motorcycle, according to a MSP press statement.

Preliminary investigation indicates that Wolf was dragged by the trailer on I-75 for several miles until the driver pulled over at the Holly Road rest area. The driver, a 72-year-old male from Waterford, is cooperating with the investigation.

Critically injured, Wolf was transported to Genesys Regional Medical Center in Grand Blanc where he was pronounced dead later that day.

The investigation is ongoing and anyone who may have witnessed the accident is asked to contact the MSP at 1-855-MICHTIP.

Funeral services were held for Wolf on Tuesday at Fenton High School. His wife and four children survive him.

On Monday, Gov. Rick Snyder ordered U.S. flags within the State Capitol Complex and on all state buildings to be lowered to half-staff on Tuesday, Sept. 1, in honor of Wolf.

“Trooper Wolf gave the ultimate sacrifice in service to our state and his fellow Michiganders. Despite possible risks, he felt the duty to serve and went to work every day to keep our communities safe,” Snyder said in a press release. “On behalf of the entire state, I sincerely thank Trooper Wolf for his service and join with his family, friends and colleagues in mourning his tragic loss.”

Kibbey Etue, director of the MSP said: “Our troopers know the dangers they face each time they put on their uniform, but the calling they feel to serve the public is stronger than any fear. Trooper Wolf will forever be remembered as a loving husband, dedicated father and outstanding public servant.”

A GoFundMe page set up on behalf of Wolf’s family had raised $135,888 as of late Tuesday, September 1, surpassing the initial $75,000 goal, which has been increased to $200,000. Donations can be made online at: www.gofundme.com/kk2xtxns