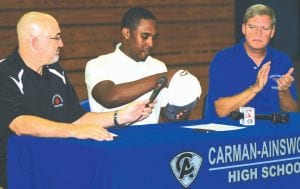 FLINT TOWNSHIP— For most high school kids, the hardest part is earning a Div. 1 scholarship offer. For Carman-Ainsworth’s Denzel Watts, getting an offer was no problem. The real task for Watts was choosing between an astounding 14 different Div. 1 offers for collegiate basketball. Watts recently narrowed it down to just three schools before announcing at last Thursday’s press conference that he will attend the University of Alabama-Birmingham next fall.

Watts was a highly-touted recruit, and chose to suit up for the Blazers over Florida State and Southern Cal.

“You have to go where you fit in the most,” said Watts. “You have to go where you feel most comfortable, and I feel most comfortable at UAB, and I felt it was a better situation for me to go to them. I can come in and start, well, work my way to start, and at the other schools, I probably would’ve been the seventh or eighth guy off the bench. I wanted to come into college basketball playing, and I felt like that was the best decision for me, so that’s why I chose UAB.”

The future sports medicine major felt a loyalty from UAB that no other school showed during the recruiting process.

The whole process has been a stressful one for Watts, who is glad to finally have the pressure of choosing of of his back.

Denzel had planned on making his college commitment a couple of weeks prior, but decided to visit UAB before making his final decision.

“I was going to commit, but that’s when UAB had scheduled an official visit, and since they had always been there, I had to give them the benefit of the doubt,” stated Watts. “People say big is better, but I was like let me try something a little smaller than Florida State and USC. I mean, it’s not that much smaller because they’re in Conference USA, but when I got there, it was nice down there and I just felt like at home.”

The number one goal for the time being, however, is to lead the Cavaliers to a state championship in his senior season.