Hopes, dreams and the media on UM-Flint stage 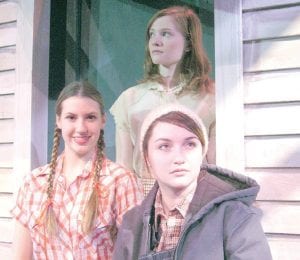 A scene from the upcoming play The Ruby Sunrise at the University.

FLINT — The University of Michigan-Flint Department of Theatre and Dance presents The Ruby Sunrise, Feb. 11-13 and 18-20 at the UM-Flint Theatre, 303 E. Kearsley St., Flint.

The curtain goes up at 7:30 p.m. for Friday and Saturday performances; Sunday matinees begin at 2 p.m.

Set in 1927, ambitious Indiana farm girl Ruby craves more than a husband and babies. She wants to invent an all-electric television as a means to end war, “cause who could bear . . . to see war right in your own living room?” she wonders. Despite the roadblocks, she achieves her dream — only to be beaten to the patent office by Philo T. Farnsworth.

Jump to New York in 1952, where Ruby’s illegitimate daughter, Lulu, is a grown woman working as a script coordinator during the Golden Age of television. She, too, has a dream — to share her mother’s story via television. Ironically, Lulu has troubles of her own in the form of enterprising writer, Tad Rose.

The 2005 drama, written by Rinne Groff and directed for this production by Carolyn Gillespie, wrestles with feminism, persistence, and the ‘reality’ that the media chooses to show.