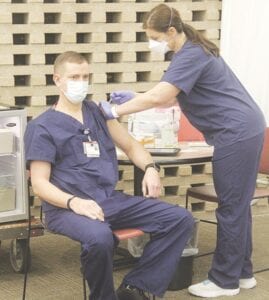 Patrick Bryant, RN, a frontline medical worker at McLaren Flint, was the first employee there to receive the COVID-19 vaccine. Photo by Gary Gould

FLINT — For Patrick Bryant, a registered nurse with McLaren Flint, receiving the first dose of the Pfizer COVID-19 vaccine Thursday was the light at the end of a dark tunnel.

Bryant and five other frontline healthcare workers at McLaren Flint received the first vaccinations at a media event in the hospital’s auditorium.

McLaren had anticipated receiving its first shipment of the Pfizer vaccine Monday, said Chief Medical Officer Binesh Patel, MD. Timetables had to be adjusted for the first inoculations because the shipment did not arrive until Thursday.

Patel said the arrival of the vaccine was a much-welcomed relief after nine months of McLaren’s staff fighting the virus on the frontlines.

“This is a long time coming,” said Patel. “The staff, the patients, everyone has suffered for the last nine months so to have this finally be here…we’re taking the fight to COVID.”

He said McLaren is going to push forward and get everyone inoculated who wants the vaccine. Patel also said the hospital is looking forward to the day when it can start inoculating the general community as well.

Patel explained that the vaccine was administered to just five healthcare workers the first day because it was a new process and the hospital wanted to use the first day as an opportunity to work out any delays. Because the vaccine must be kept in deep freeze conditions, he said the hospital only wanted to remove a limited number of vials from storage in case there were delays in administering the inoculations early on.

“So, we did five to start with make sure the process works,” said Patel. “We go live tomorrow morning (Dec. 18) for everyone who wants the vaccine.”

Bryant, an RN who works in several areas of the hospital including the COVID ward, said he considered it “an honor” to be the first worker to receive the vaccine.

“We’ve been dealing with this every day for months,” he said. “It’s getting old and we’re ready to get things back to normal. This is the only way I feel it’s going to happen. I’m excited.”

The other first day recipients of the vaccine included an Intensive Care Unit nurse, a respiratory therapist, a CNRA (Certified Registered Nurse Anesthetist) and a doctor who cares for patients at the hospital.

Also, on Thursday, Hurley Medical Center reported it received 975 doses of the Pfizer vaccine and it began administering the first round of vaccinations to its team members who volunteered.

The first vaccines at Hurley went out to a doctor, a respiratory therapist, a nurse and an environmental technician.