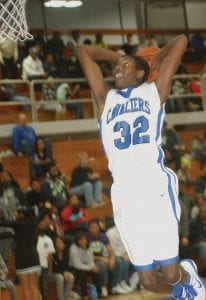 Anton Wilson goes up for a two-handed slam dunk in the second half against Clarkston.

FLINT TWP.
— Scheduling Clarkston every year is usually just a measuring stick for the Carman-Ainsworth basketball team, a way to let the Cavaliers know what they have to work on for the rest of the season.

Beating the Wolves is a bonus.

Carman-Ainsworth snapped a fivegame losing streak to one of the state’s best programs last Wednesday, by beating Clarkston, 44-38, at home. Denzel Watts scored 24 points, including 11 in the fourth quarter, as the Cavs stayed unbeaten at 3-0 at the time.

Carman-Ainsworth had lost five straight regular-season games to the Wolves since beating them in overtime of the Class A state quarterfinals in 2004. The Cavs also edged Clarkston in overtime in the 2003 state quarters as they reached the finals both years. Clarkston still leads the all-time series between the schools, 10-6.

“We just have great respect for Dan Fife and his teams. Their program is the epitome of what a program should be in the state of Michigan. He gets so much out of his kids. We feel good that we were able to beat them because of the respect we have for him and his program.”

The game was close throughout, with Carman-Ainsworth taking a 30-27 lead into the fourth quarter. Watts then scored his team’s first 11 points of the period to keep the Cavs ahead by three, 41-38, with 49 seconds left. A breakaway layup by Larry Doby with 18 seconds left sealed the outcome at 43-38.

“Denzel made a lot of big shots for us down the stretch,” said Root. “He hurt his back on one play earlier and I knew he was sore. But he’s just got a knack for pulling up and making shots.”

The Cavs jumped out to a 12-4 lead as Clarkston struggled to get its shots to drop. But the Wolves quickly closed the gap, and after Anton Wilson collected his second foul, Carman slowed the game down to kill time. The Cavs took most of the final minute off the clock before Watts scored on a jumper in the lane with :03 showing to put them up, 20-18, at halftime.

“It didn’t bother me to run a little clock because I just wanted it close at the end,” said Root. “Fortunately, down the stretch we made a couple of baskets that gave us just enough cushion to win the game.”