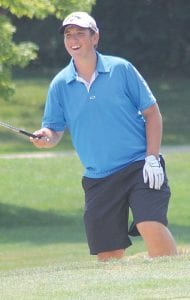 Andrew Koerkel enjoys a laugh with his playing partners as he ponders a difficult lie in the trap on the 18th hole at Warwick Hills Golf and Country Club.

GRAND BLANC — Temperatures were high, but scores were low in the third major Flint Junior Golf Association tournament of the summer last Monday.

In heat that topped 90 degrees before the final group came in, Jordan Harris shot a cool 2-over-par 74 to win the inaugural Mallon Cup Challenge at Warwick Hills Golf and Country Club. The Grand Blanc junior edged Davison graduate Gabe Schiller by one stroke for his first victory in five years of FJGA play.

Schiller had won the Henrickson Award two weeks earlier in the first of three consecutive major tournaments the FJGA has dubbed “The Big Three.” Kevin Berry of Fenton captured the Mancour Cup last week. The Mallon Cup Challenge was added this year in memory of Dr. Harold Mallon, a longtime benefactor of youth activities in the Grand Blanc and Genesee County area.

Tailor Przybylowicz of Fenton won the girls’ Mallon Cup with an 83, two strokes better than Caycee Turczyn of Lapeer West. Rhiannon Rush of Grand Blanc and Kristen Loiselle of Swartz Creek tied for third with 93s.

Both the boys’ and girls’ champions came out of the first flight of the Jack Nicklaus Group, the FJGA’s top division.

The girls’ championship flight had only four entrants, as many of the top players were competing in the Michigan Women’s Amateur in East Lansing.

Harris had completed his round by 11 a.m. and was headed for a day at Holly Beach when he was called back to accept his trophy at 1:30 p.m. The title wasn’t decided until Schiller doublebogeyed the 18th hole, while Harris and three friends waited in T-shirts and sandals.

The FJGA will hold its final week of regular-season play next Monday, then close the year with a tournament July 30-Aug. 1.