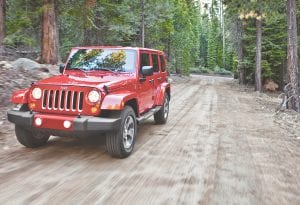 The Jeep Wrangler was named “Hottest 4×4-SUV” for the eighth consecutive year at the Specialty Equipment Market Association (SEMA) Show in Las Vegas, cementing Wrangler’s position as a crowd favorite for customization. The “Hottest 4×4-SUV” trophy was presented at the SEMA Show Awards Breakfast on Tuesday morning.

Ram pickup also earned SEMA recognition as a finalist in the “Hottest Truck” category. In the “Hottest Sedan” segment, Dodge Charger also received a finalist nod. “Customization is a key element to increase customer satisfaction and loyalty. The SEMA Award for the Jeep Wrangler and special recognition for the Ram Truck and Dodge brands showcases the passion generated by our vehicle brands,” said Pietro Gorlier, Head of Parts and Service (Mopar), FCA. “The Jeep Wrangler is a unique case in the industry, with 98 percent of all Wrangler vehicles sold equipped with at least one of our accessories. And as the Jeep brand prepares to unveil the next-generation Wrangler, Mopar will be ready to support the most capable vehicle in the world with a new portfolio of products.” 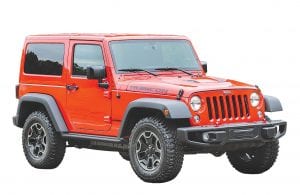 “The Jeep Wrangler is iconic in the aftermarket world, and the SEMA community continues to embrace the vehicle,” said SEMA President and CEO Chris Kersting. “Given Jeep brand’s versatility and mass appeal, it’s not surprising that SEMA Show exhibitors have voted the Jeep Wrangler the Hottest 4×4-SUV year after year.” 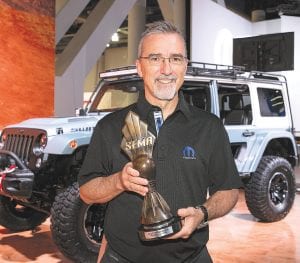 Pietro Gorlier, Head of Parts and Service (Mopar) – FCA, with the “Hottest 4×4-SUV” award, claimed by the Jeep Wrangler for the eighth consecutive year at the Specialty Equipment Market Association (SEMA) Show in Las Vegas.

Mopar has also established 13 Mopar Custom Shops in four different countries to enable owners to personalize all FCA US vehicles even before owners take delivery. This year, the brand is also opening two new Mopar Parts Distribution Centers (PDCs) in the U.S., and a total of three worldwide to deliver Mopar parts and accessories to dealers and customers when they need them.

The SEMA Awards, launched in 2010, are the SEMA Show’s definitive OEM award, shining a light on the hottest vehicles that showcase and launch aftermarket parts. For more information on the SEMA Show, visit www.SEMASHOW.com.