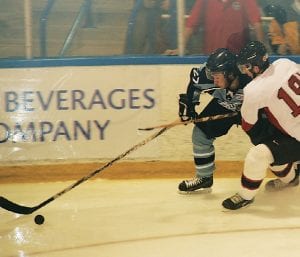 The Loggers’ J. Taylor mixed it up with an Indiana player last Friday at the Polar Palace.

LAPEER
— Grand Blanc native Ryan Howarth had one crazy week for the Lapeer Loggers of the All American Hockey League, which started last Friday when the 6- foot-1, 181 lb. forward put up the team’s firstever four-goal performance in a 5-4 victory at the Polar Palace over the Indiana Blizzard. That led to the Nov. 1 league announcement that Howarth had been named the AAHL Player of the Week for the period ending Oct. 31, allowing the team to raise its overall record to 2-1, despite the fact Sunday’s game at Queen City was postponed because of poor ice conditions.

Because the Blizzard outshot Lapeer, 40-32, for the game, including 17-12 in the first period and 12- 10 in the second, they were able to dominate the initial session of play, starting at 12:36 when Billy Hunt scored the evening’s opening goal on passes by Peter Pritchett and Ben Huebsch. Chase Tippin then doubled Indiana’s lead at 13:27 with help from Cameron Sault and Shane Furguson, a margin which grew to 3- 0 at 16:54 when John Sarno hit nothing but net on the Nigel Hawryliw assist.

The action took a much different turn during the second stanza, though, a trend Zach Macvoy put in motion for the Loggers at the 9:36 mark with help from Christopher Smith to make it a 3-1 game. That set the scene for Howarth’s coming out party, which began by lighting the lamp for Lapeer at 10:22 on passes by Albert Mitchell and Macvoy and shorthanded at 17:26 on the Mitchell and Derek Merlini assists.

In the third period Indiana did go up once more at 4-3 when Hunt bent the net on the powerplay at 3:01 with assistance from Huebsch and Brian Jacque, but Howarth managed to lock things up yet again for the Loggers, this time at 5:12 with help from Mitchell. It wasn’t until almost seven minutes later that Howarth blasted in Lapeer’s game-winning score, a feat Macvoy and Mitchell were proud to be a part of.

With five infractions for 10 penalty minutes, as opposed to six penalties for 12 minutes in the box for the Blizzard, the Loggers’ defensive efforts were headed up by goalie Matt Wagner with 36 saves against 40 shots on goal, which Indiana netminder Jay Linder countered with a 27-for-32 performance.

Lapeer is now tied for the AAHL’s top spot with Battle Creek and Troy, all with four points after three games played. The rest of the league consists of Queen City with three points, Indiana has no points after two games played, and Wooster has yet to take the ice this season.

Individually, Howarth is now the league points-leader with five goals and an assist for 2010, a mark he shares with three others, including Mitchell with six assists. Brent Sullivan is also at the top of the charts for the Loggers with four points to tie with five others for ninth place. In the goaltending department Lapeer’s Dave DeSanders is the AAHL’S number two man in the mask at 1-1 with a 3.45 goalsagainst average and 79 saves in 121:38 minutes played, followed by Wagner in fourth place with a 4.00 GAA with 36 saves in 60 minutes of ice time. The Loggers are in action tomorrow against Indiana.