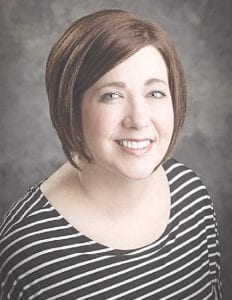 GRAND BLANC TWP. — Resident Sarah Hugo is running for one of the four-year trustee seats on the Grand Blanc Township Board of Trustees.

Hugo, 42, grew up in Goodrich and has been a Grand Blanc Township resident for 17 years. She is a Personnel Assistant at Grand Blanc Community Schools for 20 years.

She said she started attending Grand Blanc Township board meetings regularly due to her concern for her neighborhood roads, which she said are literally crumbling.

“Residents in our neighborhood have tried for over a decade to get Grandville Estates repaved,” said Hugo. “One of my goals is to streamline the Special Assessment District (SAD) process for Grand Blanc Township residents.”

There are several neighborhoods in the township she said have roads that are in dire need of repaving. Hugo said many people don’t know where to being in the process or how challenging it can be.

“After spending more than 50 hours collecting signatures from neighbors last summer, I became very frustrated with the process,” she said. “Our roads will be repaved this summer and we couldn’t be more thankful to the board for their approval. My husband and I take great pride in keeping our house and yard well maintained. By having our roads repaved, not only will make our entire neighborhood beautiful again, it will increase our property value.”

Hugo has been married to husband, Brian, for 16 years. The couple has a son named Benjamin who is turning 11 this month.

She said she has an Associate’s Degree from Baker College in Business Administration, is a graduate of Grand Blanc Township Citizens Police Academy and she’s on the Board of Directors for McKennasSquad Beauty Bar – a non-profit organization created in honor of McKenna Schummer.

Hugo said she was nominated for the Chamber of Commerce Children’s Hero Award in 2018 and has been a volunteer for Tim Tebow’s Night to Shine.

Hugo said she will work hard and will always consider the benefits to all township residents if elected. She said she is running on a platform of honesty, transparency and doing her best to make the community better for all of its residents, regardless of their party affiliation or her party affiliation.

“If elected, I will work hard and always consider the benefits to all township residents before making a decision,” said Hugo. “I will always be respectful and listen to any resident who has concerns or suggestions and will follow up with them on the outcome. I have a passion for our community and would love to have the opportunity to serve the residents of Grand Blanc Township.”

Hugo is running as a Democrat in the August primary election. She will face incumbents Joe Massey and Ken Thomas, as well as candidates Jude Rariden and Paul J. White for 4, four-year terms. On the Republican card are incumbents Lonnie Adkins and Al Mansour, as well as challengers Christopher Estes, Joel Feick, Jay Johnson and Ryan Thompson.

This is Hugo’s first run for public office.

Any candidate running in the Aug. 4 primary wishing to be profiled in the View Newspapers should contact ggould@mihomepaper.com.