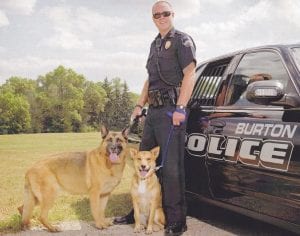 Kevin Kissel from the Burton Police Department posed with Tess and Lexie.

BURTON — As a way to raise money, the Genesee County Humane Society is selling its “Be A Hero” 2011 calendar featuring local police, firefighter and emergency medical personnel and shelter pets.

Tara Sturgis, community relations coordinator for the Humane Society, said the calendar is the first time the shelter has done this in a long time and that the featured personnel were on a volunteer base.

“I called the different places and had a few people say yes,” she said.

The cover of the calendar features the Oscar, the 2011 Society Ambassador, who is owned by Vince Lorraine and Sherron Barden.

While all the featured animals on the calendars have been adopted, Sturgis said the two dogs posing with Kissel are his dogs. “He adopted them from us,” she said.