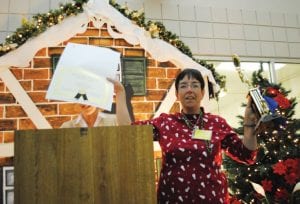 Volunteer Lana Lindsley was named the 2010 Volunteer of the Year by the Genesee County Humane Society at its Fourth Annual Volunteer Appreciation Holiday Banquet Dec. 2.

BURTON
— The dogs and cats weren’t the only ones celebrating when the Humane Society of Genesee County held its Fourth Annual Volunteer Appreciation Holiday Banquet Dec. 2.

During the annual event, the humane society honors all of its volunteers for help throughout the year, along with honoring a few special volunteers in specific categories such as customer service, pet therapy and junior volunteers.

The banquet began with Executive Director David Tucker, who spoke on how volunteers make a difference at the Humane Society. He was followed by Terry Rozyla-Ashley, volunteer coordinator, who gave out the awards.

“I call her our sunshine,” said Rozla-Ashley.

Lindsley has been volunteering at the Genesee County Humane Society for close to one year, coming in three times a week to do the newspapers, laundry and other volunteer tasks at the shelter. “I love it,” she said.

The Humane Society of Genesee County has more than 400 volunteers that devote their time and effort to bettering the lives of people and pets in the community. In 2010, the humane society was able to connect more than 2,000 animals with their “forever homes”. For more information on the Genesee County Humane Society, call 810-744-0511 or visit www.geneseehumane.org.