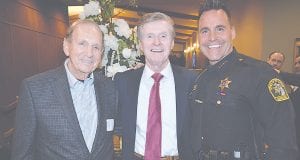 FLINT — A group of local men and women are striving to make a big difference in the lives of first responders and their families in 2020.

On Jan. 28, the Hundred Club of Genesee, Shiawassee and Lapeer counties held its annual Dinner Meeting at the Flint Golf Club to honor fallen police officers and firefighters. The organization, which is comprised of business, civic and law enforcement leaders, supports the families of police officers, firefighters and federal agents who have died in the line of duty.

When a law enforcement officer or firefighter in Genesee, Shiawassee or Lapeer counties is killed or disabled in the line of duty, a representative from the Hundred Club delivers a check to his/her dependents within 24 hours of the incident.

Following the initial donation, an evaluation committee comprised of Hundred Club members meets with the surviving spouse to determine what other immediate financial obligations need to be met.

Andy Suski, who serves on the Board of Directors for the Hundred Club, said that this gesture helps to ease the burden of immediate expenses for the families of fallen or disabled officers.

“We are there for families for 10 years, and we reevaluate what needs to be done (to help them) over that period,” he said. “We’ve made house payments, car payments and helped put children through college. It’s a significant assistance.”

During the banquet, the Hundred Club paid tribute to David Williams, a Flint City police officer who died in 2009 as a result of injuries he sustained a year earlier while responding to a traffic accident. When Williams passed away, the Hundred Club stepped in to assist his family with financial contributions and emotional support.

Mark Williams, David Williams’ younger brother, spoke to the club about his brother’s passion for policing and about the strong bond that they shared. Mark, who served alongside David on the Flint City police force, thanked the club for its commitment to caring for cops and their loved ones.

“I stand here with family who support these brave men and women in everything that they do,” he said. “The Hundred Club makes a difference. Every time you make contributions, every time you reach out…you’re making an impact far beyond law enforcement.”

In addition to assisting families of fallen first responders, the Hundred Club also provides safety grants for local police and fire departments. These funds are used to purchase safety equipment such as bulletproof vests, thermal imaging cameras and firefighting helmets.

Since its beginning as the Hundred Club of Flint in 1975, the Hundred Club has provided over $200,000 in contributions to the families of fallen first responders. It has also awarded over $1.3 million in safety grants to local police and fire departments.

“Sometimes, (our officers) feel like they’ve been forgotten,” he said. “Having a partnership with a civilian group such as the Hundred Club restores our faith and hope in what we do every day.”

To become a member of the Hundred Club or to donate to the family of a fallen first responder, visit 100clubgsl.org.