(Above) Over 50 tables of volunteers, food and packaging supplies fill the floor of the Dort Federal Event Center for the Dr. Martin Luther King Jr. Day of Service. (Left) A strong, young volunteer hauls around a large bag of bulk oatmeal, filling bins at various tables. Photos by Paula K. Schmidt

FLINT — AmeriCorps, United Way and hundreds of volunteers from organizations, employers, schools and individual families across the county joined forces on Monday, as a day of service in honor of Dr. Martin Luther King Jr. day, rather than enjoy the day off doing as they pleased. Coordinated and assisted by United Way staff, including CEO Jaime Haskins, Amy Lee Venable, and Diane Woodruff, among others, bulk oats and other foods were packaged into smaller portions for inclusion in boxes which will be distributed by the Food Bank of Eastern Michigan to needy families across the county.

Some volunteers acted as runners, bringing empty boxes and taking away full ones, and some loaded the boxes onto dozens of waiting trucks to be transported back to FBEM from the Dort Federal Event Center where the event took place. Depending on the size of the volunteer group, some may have everyone at a single table, while others get combined with other teams at a table, and there were well over 50 tables packed with volunteers large and small, packing the food. 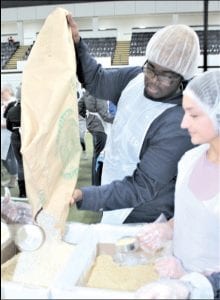 According to the United Way’s report on the 2019 event, each January, the MLK Day of Service celebrates Dr. Martin Luther King Jr. for his public service and activism. The diverse group of volunteers, from elementary students to AmeriCorps members to retirees, joined together with a common goal: to enrich our community and empower residents through service. Dr. King believed that many social ills can be solved through citizen service. Recognizing that 1 in 5 Genesee County families deal with food insecurity, United Way of Genesee County set out to combat this problem by engaging neighbors to help neighbors.