Hunting outside of Michigan this fall? 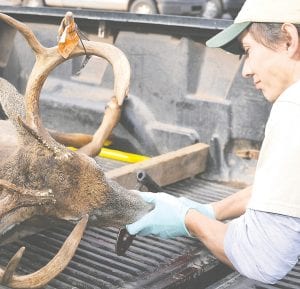 A deer is checked through one of Michigan’s multiple deer check stations.

STATEWIDE — For those who plan to hunt outside of Michigan this fall, it is important to note that regulations related to the importation of harvested cervids (such as deer, elk or moose) have changed substantially.

Hunters who harvest a cervid in any other state or province can bring back only the following cervid parts into Michigan:

• Quarters (legs that do not have any part of the spinal column or head attached).

• Antlers attached to a skullcap cleaned of brain and muscle tissue.

“Hunters need to realize that the new importation regulations apply to any location they hunt outside Michigan, not just those states and provinces that have chronic wasting disease,” said Chad Stewart, Michigan Department of Natural Resources deer and elk specialist. “These changes have been put in place in hopes of keeping potential cases of CWD from unintentionally being brought into Michigan.”

CWD is a contagious neurological disease affecting members of the Cervidae family, including deer, elk and moose. It attacks the central nervous system of infected animals and results in emaciation, abnormal behavior and loss of bodily functions. There is no recovery. The infectious agents causing CWD are prions, which are nonliving proteins that can persist in the environment for years or perhaps decades.

“We’re asking everyone who hunts out of state to understand and follow these regulations,” said Dean Molnar, assistant chief of the DNR Law Enforcement Division. “Those who don’t will face fines, penalties and confiscation of the animal. We need everyone to abide by the regulations and follow the law. The health of Michigan’s big-game population depends on the cooperation of hunters. We are all in this together.”

In April 2015, a female, 6-yearold, free-ranging white-tailed deer in Ingham County was killed and confirmed positive for CWD. This marked Michigan’s first-ever case of chronic wasting disease in a free-ranging cervid.

Since the discovery of that first animal, the DNR has sampled 13,458 deer from around the state (as of August 2017). A total of nine animals have tested positive for CWD.

For those hunting in Michigan within areas where CWD has been found, there are specific regulations that must be followed. For more information, visit mi.gov/cwd.

Any leftover antlerless deer licenses not issued in this drawing will be sold on a first-come, first-served basis beginning Tuesday, Sept. 5, at 10 a.m. EDT until license quotas are met.

The 2017 antlerless deer license quotas for each DMU also can be found at mi.gov/deer. Please note, DMU 333 has unlimited antlerless licenses that may be purchased without application beginning Sept. 5 at 10 a.m.

For additional information, the 2017 Michigan Antlerless Deer Digest is available online at mi.gov/dnrdigests.