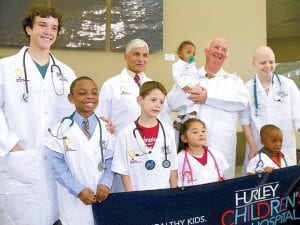 GENESEE COUNTY — As an infant, Alex Ray of Swartz Creek was diagnosed with congenital lobar emphysema, a lung condition so rare that there are only about 100 cases a year worldwide.

When his lung collapsed, he was admitted to the Pediatric Intensive Care Unit (PICU) at Hurley Medical Center where he underwent five surgeries including removal of one-third of his lung.

Alex is now 14 and one thing he isn’t lacking is lung power. Not only is he a four-time winner of Swartz Creek Idol, put on during Hometown Days, but he is active in football, lacrosse, swimming and theater. He and his dad played the roles of prince and king in the Flint Community Players’ recent production of “ The King and I.”

Other than asthma, Alex has no physical limits, said his father Paul Ray, who sings the praises of Hurley’s pediatric care where his son spent a lot of time during the first year of his life.

Alex was one of seven former pediatric patients on hand Tuesday for the ceremonial launch of The Children’s Hospital at Hurley Medical Center – one of only three hospitals within a hospital in the state of Michigan.

“Everyone knows that Hurley is the place to go if you have a sick or injured child,’’ said Patrick Wardell, Hurley’s president and chief executive officer speaking to a crowd of about 150 people gathered at Hurley’s new lobby. He underscored the regional status of Hurley’s Children’s Hospital serving patients in 15 counties, all the way up to Alpena in the north, Mt. Pleasant, to the west, east to the Thumb and all of Genesee and Shiawassee counties.

“In order to continue to provide our infants, children and adolescents with the very best physicians, nurses and clinical care available, we are launching Hurley Children’s Hospital, destined to be the premier pediatric medical facility in the region, and the state,’’ Wardell said, adding that it is a big step to grow from being a pediatric center to a children’s hospital.

Some might question Hurley’s continued expansion in the current economy Wardell said but he called the Children’s Hospital the next step in the vision set forth by Hurley’s founders back in 1907.

“ We are declaring our optimism about our children’s future,” Wardell said. We believe Flint will turn around.’’

In his remarks, Brian Nolan, MD, Director, Clinical Pediatrics, said that since Hurley became a trauma center 15 years ago it has grown to become the third busies pediatric trauma center in Michigan.

Aftab Aftab, MD., Chairman, Pediatrics Department, said Hurley’s nationally-recognized PICU sees more than 1,200 admissions per year. He spoke of a child found unresponsive floating in a pond four weeks ago. Thanks to the level of care he received at Hurley’s PICU “the kid made it and he’s back in the lap of his mother,’’ Aftab said.

Other pediatric success stories presented include Alex Ray; Deion Wright, 3, of Flint, a survivor of kidney cancer; Kaidyn Lewis, 14 months, of Flint, who was born two and a half months premature; Waymond Beavers Jr, 7, born with no rectal opening and underwent nine surgeries in the first two years of his life; Archer Granger, 7, of Metamora, who lost part of his foot in a lawnmower accident; Lollie Velez, 5, of Saginaw, diagnosed with leukemia at age 2 and now in remission; and Kirsten Hughes of Pinconning, who is currently being treated for brain cancer, the result of a rare genetic mutation in her family.

Wearing lab coats and stethoscopes, the children helped unfurl a banner bearing the logo of the new Hurley Children’s Hospital.