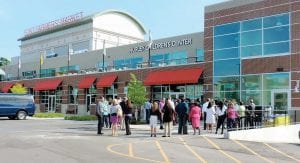 Well-wishers and officers gathered for a ribbon-cutting ceremony last week at the Hurley Children’s Center located at the Flint Farmer’s Market.

FLINT — Less than a year has passed since Hurley Medical Center staff toured the Flint Farmer’s Market and first entertained the radical idea of locating its’ children’s center there.

After a ribbon-cutting ceremony last week, the 10,300 square-foot, state-ofthe art child-friendly facility opened its doors to the public on Tuesday, August 11.

Located on the second-floor of the Farmer’s Market, in the former Flint Journal printing and circulation plant, the $2 million dollar center offers 12 pediatric specialty clinics, 24 exam rooms, a lab, an innovative teaching area and more.

The center is a collaborative effort of Hurley Children’s Hospital and the Uptown Reinvestment Corporation (URC), which operates the Flint Farmers’ Market. The Charles Stewart Mott Foundation provided $1 million in funding for the project through grants to the Foundation for the URC.

“We really believe we hit a sweet spot when the decision was made to incorporate this clinic into the Farmer’s Market,” said Melany Gavulic, president and CEO of Hurley Medical Center, at the ribbon-cutting event. “Not only is there nothing like it in the rest of the country but the innovation of having access to nutritious foods and all of the other wrap-around services all in one place is a distinct advantage,” she said. 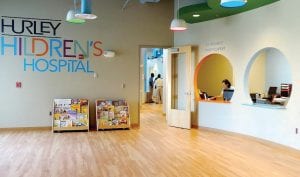 Primary colors were used to decorate the center’s reception area, including the light fixtures, for added appeal to children.

Ridgway White, president of the C.S. Mott Foundation, who first pitched the idea for the center last September, said it furthers a decades-old goal to create a health and wellness center as evidenced by the neighboring Michigan State University College of Human Medicine which opened in November.

More than 100 children a day and their families are expected to visit the center, said Mona Hanna-Attisha, director of the Hurley Pediatric Residency Program. 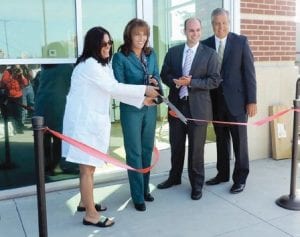 “This center is a game changer’’ she said. “Being here, our patients will have easy access to transportation … one of the biggest barriers to health care … right across the street.”

Other wraparound services besides the fresh foods sold at the Farmer’s Market, will include an onsite social worker and nutritionist and future plans to co-locate with WIC and mental health services, she said.

“The center is more than a clinic,’’ she added. “This center has been uniquely designed to educate the next generation of doctors.”

Students at the MSU College of Medicine need only walk across the parking lot to get to the children’s center where they will learn to become pediatricians in the state-of-the-art teaching facility.

“These trainees will work here, live here, raise their families here and hopefully will eventually remain here to be part of our work force,’’ she said.

Tim Herman, president and CEO of the Flint & Genesee Chamber of Commerce, credited the center for strengthening “the eds and meds theme” in downtown Flint. He also cited the MSU College as well as the Genesys Pace Center for Senior Care that recently opened in a nearby building formerly occupied by the International Institute.

Herman called the Hurley Children’s Center “a win” for the entire community and said stay tuned for more health-oriented collaborations and partnerships in downtown Flint.

Karianne Martus, manager of the Flint Farmer’s Market, said they were happy to be part of the project and “looking forward to providing a wonderful array of eating choices” that will hopefully have a lasting effect on children’s health and well-being.

Visiting families will be able to use Double Up Food Bucks at the Farmer’s Market. Double Up provides Supplemental Nutrition Assistance Program (SNAP) recipients with a oneto one match to purchase locally grown fruits and vegetables. The Farmer’s Market anticipates serving 1 million visitors this year, according to a press release.