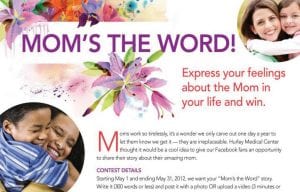 GENESEE COUNTY — One mother is described as a selfless sacrificer who not only provided support and guidance when her daughter became a young mother but also is a caregiver for her own mother who has Alzheimer’s disease.

Another mother is praised for her strength and courage battling the daily struggles of caring for a son with cystic fibrosis.

Other moms have overcome their own health problems, are coping with being a single parent and much more.

Mother’s Day — the one day set aside each year to celebrate mothers — has come and gone, but tributes keep coming from the children of remarkable women who are hoping to crown her the winner of Hurley Medical Center’s “Mom’s the Word’’ story contest.

All month, Hurley is collecting the tributes on its Facebook page and awarding a $50 Visa gift card to each week’s best entry.

From those weekly “showcase” winners, a grand prize winner will be randomly chosen on May 31 to receive a $250 Visa gift card.

There’s still two weeks left in the contest. The last day for entries is May 25 before 2 p.m.

Entries must be 300 words or less and posted with a photo on Hurley’s Facebook page at www.facebook.com/HurleyMedicalCenter. Or entrants can upload a video up to 3 minutes long describing their amazing mom.

A third weekly winner will be chosen on May 18 and the final weekly winner chosen on May 25. Entries are confirmed when they receive a “LIKE” on the post from Hurley Medical Center. Each winning weekly story is determined by the number of “LIKES” it receives during the week it was posted

One entrant said her mom could use the money to pay off some bills and buy new clothing.

This phenomenal mother was described as willing to wear hand-medowns and ride the bus in order to provide for her 10 children.

“If you meet her she will make you smile instantly, she always encourage her children and will feed the whole neighborhood,’’ the entrant wrote.

Another entrant described her mother as her biggest supporter.

She wrote: “Growing up she coached all the sports that I decided to play, even if she knew nothing about it. She was the most awful softball coach ever, but the best mom. Now I realize that she just did it to be with me.”