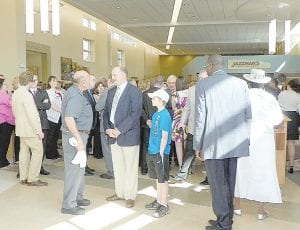 A crowd gathers at the grand opening of the new lobby at Hurley Medical Center in Flint.

FLINT TWP. — With a nod to its past and looking to its future, Hurley Medical Center’s new lobby was unveiled Friday morning at a ribboncutting ceremony.

Local dignitaries and invited guests were the first to view the 9,000 squarefoot addition and to remark on Hurley’s history and enduring value to the community.

Patrick Wardell, Hurley’s president and chief executive officer, noted that the hospital began with James Hurley’s donation of land in 1907, became bricks and mortar in 1908 and has been growing ever since.

The original building was torn down but Wardell pointed out the entrance to its 11-story replacement (built in 1928), that is visible through the windows of the new lobby, providing a sense of continuity.

Opened to the public on Monday, the lobby is the first stage of an expansion project for the Paul F. Reinhart Emergency Trauma Center which is about 70 percent completed and scheduled to open in February 2012.

“This expansion has been in our thoughts for 20 years and in reality for the last three years,’’ Wardell said.

“Hurley’s past. Hurley’s present. It’s the same,’’ he said. “It is built on a concept of serving the community. There are so many different things that have come and gone over the last 100 years. I can tell you that few hospitals survive from 100 years ago. But we don’t just survive, we thrive. We are essential and will make sure we stay connected to our community.’’

Wardell credited many political leaders with financial and legislative support for Hurley’s growth.

Among them, Fifth Ward City Councilman Bernard Lawler helped arrange bond action to pay for the expansion and was active in instituting Hurley’s no-smoking policy and a ceasefire initiative to curb community violence.

State Senator John Gleason also said he was “born’’ at Hurley 10 years ago, referring to his life-saving kidney transplant surgery. Gleason also noted the demise of many Flint institutions since he was a boy growing up in Flint, among them St. Joseph Hospital and AC Spark Plug.

“Now after all these years, Hurley is still here. Many have left, some without a choice and many with a choice but thank God Hurley chose to stay,’’ he said.

Mukkamala said he was told the expansion is one of the largest construction projects in Genesee County in the past few years. When the new 5,000 square-foot trauma unit next door is completed it will double the capacity of emergency room beds now available, he said.

Eason, speaking in the place of Mayor Dayne Walling who was out of town, recalled that it was only about a year and a half ago that the hospital board asked the city for the $35 million bond issue to help pay for the expansion. The Flint Mayor and City Council are the appointing authorities for Hurley.

“When you walk around and see how beautiful it looks, that really is what the comeback city is all about,’’ Eason said.

Kildee spoke of his assistance in getting $2 million in federal funds redirected to Hurley but said his task was easy because Hurley’s reputation for professionalism is well-known in Washington D.C.

“You were an easy sell because what you’ve had, you have done well with,’’ Kildee said.