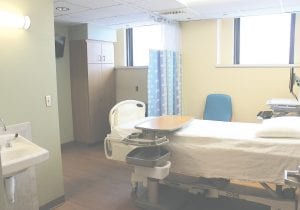 An example of one of the private patient rooms now available in the private pediatric wing at Hurley Medical Center.

FLINT — Lindsay Clark of Goodrich testified to her belief in private rooms at a Feb. 8 press conference and ribbon-cutting which revealed renovations made to the 11th floor of Hurley Medical Center (HMC), expanding their ability to offer private rooms to pediatric patients—with increased odds of a better healing process.

The Clarks are very familiar with Hurley’s services. During her son, Easton’s, last admission, Clark said she could see a visible difference in his condition when roomed with another child.

“Easton’s condition declined for the first three days we were there,” she explained. “I don’t find it any type of irony that the day (the other patient) was discharged, Easton’s condition completely turned around, he began breathing on his own, he slept through the night, he ate and we left 24 hours later.”

Easton was born with a rare condition known as persistent pulmonary hypertension in newborns, which is diagnosed in just one of 1,000 babies. Since then, he and his mother have become tireless fundraisers for the Hurley Foundation, and Lindsay Clark is also on the foundation board. 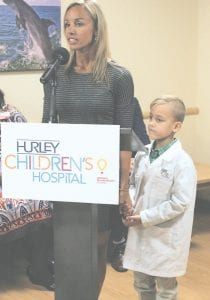 Lindsay Clark testifies to what she believes is the power of healing found in private patient rooms during a recent ribbon cutting of the private pediatric wing at Hurley Medical Center.

Mattie Pearson, service line administrator of Women and Children’s Services, said the new wing was “some kind of awesome” after wanting private rooms since she started at HMC 23 years ago.

“It’s good for patient care, for people to have their own rooms,” he said.

The new pediatric unit features 14 private rooms and other modern, family friendly touches meant to put children at ease as much as possible throughout their hospital stays. Additionally, the remodeled space includes a new children’s playroom, a teen game room, a nutrition center and a meeting space for staff and families. 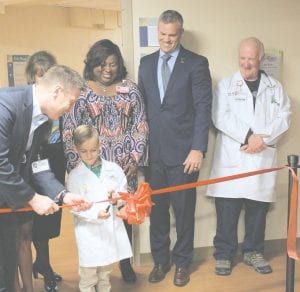 Mike Burnett, of the Hurley Foundation, holds the ribbon for Easton Clark as he cuts it to celebrate the grand opening of private patient rooms in a new pediatric wing at Hurley Medical Center. Behind them, left to right, Mattie Pearson, Service Line administrator of Women and Children’s Services, Easton’s dad, Matthew, and Brian Nolan MD.

The two-year project was funded by donations through the Hurley Foundation and as part of Hurley Medical Center’s continuing vision to provide the highest quality and best patient/family experience.

“At Hurley, we take our commitment to children very seriously,” said Mike Burnett, of the Hurley Foundation. “Not only do we offer a breadth of pediatric specialties, alongside general pediatric care, we are now very excited to have access to this additional space allowing us to increase our frequency of offering private rooms.

Hurley’s Pediatric Intensive Care Unit (PICU) will continue to be housed on the 2nd floor along with the existing pediatric unit. Both the 2nd and the 11th floors offer the same level of care for all of pediatric patients and families, Burnett said. — P.S.