Hurley wants men to ‘Man Up’ 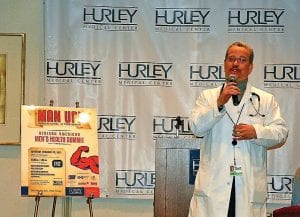 GENESEE COUNTY — A young man who watched his father die young and a young overweight father worried about living long enough to see his son grow up gave two powerful testimonies about the importance of men’s health care during the launch of the Hurley Medical Center Men’s Health Initiative last Friday.

The Initiative is a series of educational outreach events being held throughout the year to motivate men and young men countywide to take better care of their health.

“Most men don’t go to see a physician until something is very wrong,’’ said Paul Musson, a Hurley M.D., serving as men’s health champion for the Initiative.

Danis Russell, CEO of Genesee County Community Mental Health and an Initiative co-sponsor, shared the story of his father’s early death from a controllable disease.

“When I was 18 years old and … four weeks away from graduating from high school, I stood in the intensive care unit of a hospital .. and watched my father die,’’ said Russell, who described his dad as a “big tough guy” and former all-state athlete who went to work in the shop during the Great Depression and ignored his health.

“He died three years younger than I am now,’’ said Russell. “So this is something that is very personal to me.”

Russell said he hoped the Initiative would strike a chord in other men to want to live long enough to see the accomplishments of their children that his father did not.

Johnny McClendon, a Hurley employee, shared his wake-up call story. Weighing 326 pounds one year ago, McClendon recalled becoming so winded while playing with his 4-year-old son that it took an alarming amount of time for him to catch his breath while his child anxiously tried to comfort him.

“It was something about looking into my son’s eyes and realizing that my time is limited if I didn’t do something about my health,’’ McClendon said. Since he embarked on a vigorous health improvement campaign of exercise and developed better eating habits, his weight has dropped to 239 pounds and he’s tossed out the cholesterol pills and other medications.

McClendon agreed to become an ambassador for the Initiative to help spread the health care wake-up call man to man.

Genesee County has the dubious distinction of having some of the lowest health behavior scores in the state, said Patrick Wardell, Hurley CEO and president.

Women outlive men about seven years on average and a higher percentage of men die from nine of the top 10 causes of death.

In Genesee County, 35 percent of men are overweight and 38 percent are obese; 14 percent have been diagnosed with heart disease, one in 10 men in Flint have diabetes and 75 percent of men do not eat the recommended daily servings of fruit and vegetables.

Wardell credited the idea for the Initiative to Dwayne Parker, Hurley’s director of community marketing.

Parker said the effort is targeting all age groups from boys to senior citizens. It will seek to connect males to health care information and resources through seminars, health screenings and activities focused on where they work, live, play and worship.

Other planned events include:

• A comprehensive Men’s Health Expo at Atwood Stadium June 16 with keynote speaker Mark Ingram, a stand-out Flint athlete who won the Heisman Trophy in 2009 and now plays professional football for the New Orleans Saints. In addition to health screenings, the mega-event will feature men’s interests such as hunting, fishing cars and home improvement. Parker dubbed it “ a health fair on steroids.