Hydration is key with onset of high school sports practices 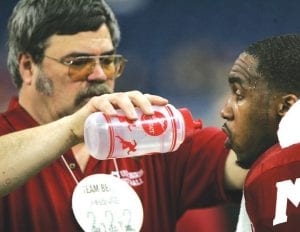 Athletes are often unaccustomed to the full effects of practicing during hot weather. Awareness in athletes, parents and coaches is key with the start of fall practices this week.

GENESEE COUNTY — With temperatures continuing to range into the mid- to high-80s, and with high school practice fields now full of kids during the hottest part of the day, the National Federation of High School Sports reminds the athletes, parents and coaches about the importance of hydration.

The NFHSS says that athletic performance declines with dehydration, beginning with a fluid loss equaling one to two percent of the athlete’s body weight. It is important for all athletes to begin each exercise session well-hydrated.

Rehydration should consist of water, carbohydrates and electrolytes, as all are lost during exercise. NFHSS stresses that athletes should never be punished through the restriction of fluids.

Minimal fluid loss can impair performance during exercise. At moderate exercise intensity, the human body generally produces 0.5 to 1.5 liters of sweat in one hour, but this may be higher in some individuals. The sweat rate increases as the intensity of exercise increases. During intense exercise in hot conditions, some individuals can lose up to three liters of sweat in one hour. A one percent drop in body weight due to fluid loss can lead to an increased core body temperature during exercise. When an athlete loses one to two percent of body weight due to fluid loss, aerobic exercise performance can decrease. When an athlete loses three percent or more of body weight, there is an increased risk for heat illness. Prevention of dehydration occurs before exercise begins, and should include a hydration protocol agreed upon by coaches, athletic trainers and all others involved in the well-being and performance of a team or athlete.

It is important for all athletes to begin each exercise session well-hydrated. Ideally, athletes should monitor their weight before and after exercise sessions in order to replace any fluids lost. It is recommended that an athlete consume 16 ounces (two cups) of water two hours before exercise begins. Another eight to 16 ounces (one to two cups) should be consumed 15 minutes prior to exercise.

Unfortunately, relying on the body’s thirst mechanism cannot prevent dehydration, so thirst should not be relied upon to determine fluid intake. By the time a person becomes thirsty, he or she is already dehydrated. An athlete should drink early and often, and be allowed unrestricted fluid replacement.

Unrestricted access to water or sports drinks should lead to the consumption of four to eight ounces (one-half to one cup) of fluid every 15 minutes. It is important to remember that some athletes may have a higher sweat rate than others and require more fluids to remain well hydrated. These athletes can safely tolerate up to 48 ounces per hour.

Some sports present rehydration challenges, such as soccer or certain running events. A cross country race can last up to 30 to 40 minutes for some runners and water stations should be set up with consideration given to the course and climate. In all settings, allowing athletes to drink as much fluid as they feel necessary is important.

Fluid replacement after exercise should aim at achieving the athlete’s pre-practice or pre-event weight. Ideally, this should occur before the next practice session or competition. However, this may not be possible if there is minimal time between competition. Consumption of 16-20 ounces (2-21/2 cups) of fluid for every pound lost during exercise will help achieve normal fluid state. Rehydration should consist of water, carbohydrates and electrolytes, as all are lost during exercise.

At the beginning of the fall sports season, athletes often participate in twice daily practices, and rehydration becomes even more important during this time. Athletes may be weighed prior to and after each practice session. If the athlete has not returned back to previous weight before the start of the second session, the athlete should be held out of participation in order to avoid dehydration-related illness.

Dehydration is common in all sports and can occur very rapidly, especially in a warm or hot environment or if the athlete starts activity less than fully hydrated. All coaches and athletes must be aware of the signs and symptoms of dehydration. The Michigan High School Athletic Association has a complete hydration guidelines press release on its web site at www.mhsaa.com.