I choose man in battle vs. machine 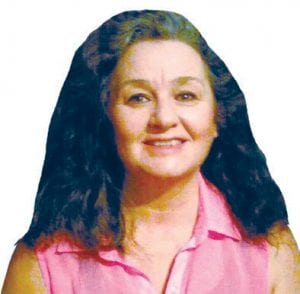 It was a difficult day, and I still had to stop at the store, which I hate doing even on good days. I needed hamburger. That’s all.

So I picked up some strawberries, and doughnuts, milk, mascara, a birthday card and a pound of ground sirloin. Then I headed to the checkout.

Going to the checkout was once a simple matter of finding the quickest cashier with the least groceries to ring up.

Now it’s a whole big thing, a moral dilemma. Do I go to the self-serve aisle or a cashier?

I don’t want to incite widespread panic but, in case you haven’t noticed, the machines are taking over. They’re muscling out human beings. Being as I, myself, am human, I feel a certain loyalty to the cause. But I have to admit there are times I want to shout, “Right there! That’s why you’re all being replaced by machines!”

When I was young, before I went to school, I learned about the Golden Rule. It seemed logical, so I adopted it as a personal guiding tenet. I haven’t always adhered to it, that’s true. In fairness, it hasn’t always worked for me. But things made more sense once I figured out that a lot of people follow a different code.

Lately, those people seem to have ratcheted up the ugly factor. I’ve experienced it personally and seen it on TV (because, apparently, it has “entertainment value”). People embarrass, intimidate, provoke or otherwise abuse, and they’re rewarded.

It’s disturbing, especially since a lot of those people can’t even articulate a reason for all their vitriolic pontificating.

I would like to be able to have a decent, respectful exchange of ideas, or ask a question, without running the risk of being called a communist by a crazy man at a gas station in Fort Wayne, Ind. (Sorry. I digressed.)

In any case, this is not an efficient way to run a culture. It is not an effective way to solve problems. These are not good examples of human beings.

Consider this: people have limitations. We have to sleep, which reduces our productivity by about a third. We’re prone to mistakes, which is counterproductive. And things like anger, frustration, boredom, fatigue, apathy and so on affect our abilities to perform optimally. So you would think, under the circumstances, we would be on our best behaviors.

On the flip side, we also have remarkable capacities for compassion, understanding, creativity, beauty, humor, wonder … and we can think analytically without being coded to do so, if we so choose.

In fact, this is the model being nurtured in our schools today. So, there is hope. I mean, in the classic conflict of man v. machine, our humanity really is the only arrow in our quiver.

That night at the store, I picked the line with the cashier. She was in a silly mood and she made me laugh.

The last time I went to the self-serve aisle, I swore at the machine. In my defense, it started it. lrocha@mihomepaper.com