‘I don’t take anything for granted now’ 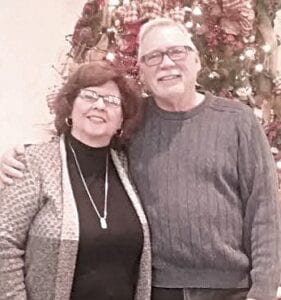 Walt and Becky Chupek are looking forward to a longer future together thanks to the lung transplant Walt received just after Thanksgiving. They encourage people to think about organ donation as a way to give others a second chance at life. Photo provided

DAVISON — Due to the pandemic, Davison residents Walt and Becky Chupek had a small Thanksgiving – just the two of them. Walt didn’t have enough energy to cook the turkey, as he had planned to do. The next day, he laid down to take a nap. He was so overcome with exhaustion and pain that he prayed to God to end his suffering, either by taking his life or by providing a lung for transplant.

Not 10 minutes later, Becky’s phone rang. A lung was available, and they needed to get to the hospital immediately. Already packed for this possibility, they were on the road within minutes, still talking to the transplant coordinator on the phone. Walt’s prayer had been answered, and the season of Thanksgiving 2020 was one for which the Chupeks are thankful, indeed.

Walt, 65, spent years working in the trash business on Dort Highway, dealing with unknown substances in the waste from General Motors. He thinks that played a role in his development of interstitial lung disease, or pulmonary fibrosis, which is inflammation and scarring of lung tissue, which leads to coughing, difficulty breathing and fatigue. It can be caused by exposure to hazardous materials.

When Walt and Becky met on an online dating site, she said, he had the lung disease but at that time he was still able to be active, even jogging. Over the eight years of their marriage, his ability to breathe decreased until his right lung was down to 39 percent capacity.

“It was just a struggle to breathe every day or have any kind of quality of life,” said Becky. “It was a quality of life that was slowly declining all the time.”

They first discussed a lung transplant years ago, but Walt was then diagnosed for a second time with prostate cancer and had to take care of that and be cancer-free for five years before being considered. That put him dangerously close to the age cutoff, “so he was fighting time all along,” said Becky.

He was finally placed on the transplant list in late October and only weeks later, a lung was available.

Having lung disease during a pandemic of a virus that can have severe respiratory effects is scary enough, and the Chupeks have had to be extra cautious to try to avoid exposure. They were prepared for Walt to have to go through surgery and recovery alone, but Becky said because it was a holiday weekend, she was able to get in and see him a couple times. He came through the surgery and after 10 days in the hospital, he went home.

“His quality of life improved almost immediately,” said Becky. “You could hear it in his voice right away, and he was able to walk.”

Now, Walt is working on healing and plans to return to work. Becky is back to work full time at the Lapeer County Prosecutor’s Office, and they are looking forward to retiring together in a few years and moving to Florida. They are extremely grateful for the chance they have been given through the generosity of someone who chose to be an organ donor.

“There are just so many emotions and thoughts as the days go on,” said Becky, adding that she wants people to know just how life-changing organ donation can be for someone in need.

For Walt, the transplant has brought him back to life.

“It’s funny how when you can’t breathe and you lay down to die, then to get to the point that I am now,” he said. “I see everything anew every day. When you’re healthy, you take things for granted. I don’t take anything for granted now.”

The experience through the University of Michigan, said Becky, was wonderful. The staff was there every step of the way to make sure they were prepared to drop everything and go as soon as a lung was available, and to get them through the surgery and what came afterward as well.

Signing up to be an organ donor can be done using the Online Michigan Organ Donor Registry at www.michigan.gov/sos under the “About” tab. You may also sign up when you obtain a replacement or renew your driver’s license or ID card. Michigan law supports your right to make your own donation decision, however, it is still important to talk to your family members about your desire to be an organ and tissue donor, so they are aware of your intention and to avoid any delays or confusion.