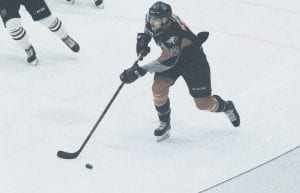 Flint defenseman Alex Peters skates the puck along the boards.

OTTAWA – Despite outshooting the Ottawa 67’s 31-27, the Flint Firebirds recorded their 10th straight loss on the road on Sunday 4-1.

There were no goals scored until the final two minutes of the first period as Ottawa’s Dante Salituro broke the deadlock with a power-play goal.

Just 1:18 into the second frame, Salituro did it once again, also on the power play. The third period, though, is when the 67’s put it away. Ben Fanjoy scored just 1:06 into the final stanza before Nevin Guy increased the lead to 4-0 just two minutes later. Luke Kirwan got his first goal in a Firebirds uniform, but it wouldn’t be enough to surpass Ottawa’s offensive prowess.

On Friday night, Flint traveled to Kingston for the first time to take on the Frontenacs, suffering a tough 7-1 loss. Kingston got to work early with a Michael Dal Colle goal just 2:28 into the game, and at the 13:55 mark, Jared Steege made it a 2-0 advantage.

It seemed as though Flint was going to get back into the game when Vili Saarijarvi connected from the point on the power play, but the Frontenacs ramped up the offense and scored a shorthanded goal with two minutes left in the opening frame, tallied by Ryan Verbeek. Kingston capped off the opening period by making it 4-1 on a Spencer Watson goal.

Warren Foegele and Julio Lammikko put the lead at 6-1 after two periods and Steege added his second of the game in the third.

The Firebirds began a four-game road trip on Thursday with a game against the Peterborough Petes, and despite opening with a lead, Flint lost control in a 6-1 defeat. It started on a very high note for the Firebirds, scoring the first goal just 6:54 into the opening period.

Matyas Kantner tipped in an Alex Peters slap shot from the point to give Flint an early 1-0 lead. From there, the game completely changed. At the 14:03 mark, Peterborough tallied on the power play with a goal from Eric Cornel to draw even, and just two minutes later, a Dominik Masin goal gave the Petes their first lead of the night.

Peterborough continued to surge on that momentum entering the second period as Logan DeNoble found the back of the net at 9:26 before a late period stretch extended the lead to 5-1. Hunter Garlent and Greg Betzoid scored just over a minute apart to put the game out of reach. Steven Lorentz added an insurance marker early in the final stanza as the Petes cruised to the victory.

The Firebirds remain in last place in the West Division at 14-23-3-2 for 33 points, seven back of fourth place Saginaw. Sunday’s loss in Ottawa was Flint’s 10th in a row, which they will attempt to rebound from this weekend. Flint travels to Windsor on Thursday before returning home for a rematch with the Spitfires on Saturday. Sunday, the Firebirds travel to Kitchener.