Ice storm of the century 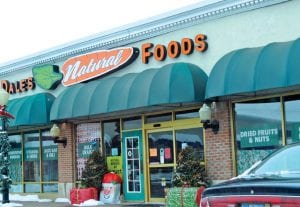 The orange sign posted in the window at Dale’s Natural Foods tells customers that the store is closed due to lack of power caused by the icestorm last weekend.

FLINT TWP. — With Christmas only three days away, an empty parking lot and all stores closed told the story at the Somerset Town Center on Miller Road. It was one of many casualties of an ice storm early Sunday that caused power outages affecting numerous businesses.

Mall properties were not affected but the outage included the Goodwill resale store next door, several chain restaurants along Miller Road, offices and shopping plazas.

Randy Wise’ Genesee Valley Auto Mall at the corner of Dutcher and Lennon was also impacted.

Generators and other lighting strategies served to get some businesses back in the game by Thursday.

But power was not restored to the Somerset Town Center until about 2 p.m. Friday – a five day outage. Businesses in that plaza include Pier One Imports, Cyril’s Salon, Outback Steakhouse, Dale’s Natural Foods, a dentist office and a vacuum cleaner store. 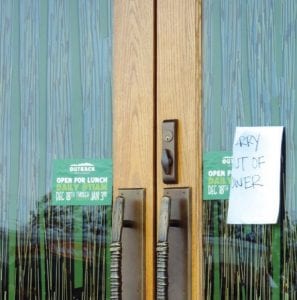 The always busy Outback Steakhouse on Miller Road was among many franchise restaurants on Miller Road closed by a power outage that in some cases lasted five days.

Staff at Dale’s Natural Foods were just getting ready to open the store on Sunday when the power went out, said Drew Wolfe, owner.

Wolfe was able to save some frozen foods by using a refrigerated truck but everything in the deli and produce sections had to be thrown out. Also, two freezers would not work when power was restored, requiring a call for repair.

But Wolfe said the pre-Christmas timing of the outage was not the worst for his business.

“It worked better for us,” he said. “Our busy time does not start until the New Year.” That’s when those get healthy and lose weight resolutions power up for many people.

Wolfe expected to be open for business as usual on Saturday morning but he did say a power outage of this length and severity has never happened in the store’s 63 years in business. 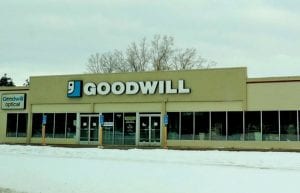 The Goodwill store was among those closed by a power outage several days before and after Christmas.

As of 11:30 a.m. on Dec. 27 – five days after the storm hit – about 44,000 Consumers Energy remained without power, according to a CE press update. The storm caused more than 385,000 outages statewide, which is more than 21 percent of the utility’s 1.8 million electric customers,

It was one of the largest storms in the utility’s 126-year history, according to a CE press release.

More than 1,000 utility workers from as far away as Kansas came to Michigan to assist Consumers Energy with power restoration.