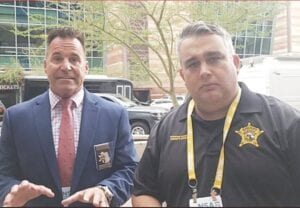 IGNITE (Inmate Growth Naturally and Intentionally Through Education) helps provide inmates the tools they need to make better lives for themselves.

So far, the program has been successful and has graduated 18 people who have either earned their GED or they are earning $16-18 an hour at a job with skills learned in IGNITE.

Locally, IGNITE is a partnership between the Genesee County Jail and Mt. Morris Consolidated Schools which has about 200 inmates enrolled in the program.

By doing this, the inmates earn credit toward time on tablets where they can watch movies, play music, do research in a free law library or play games.

Swanson said discussion at the conference in Phoenix this week turned to race relations, and one of the ways Genesee County is approaching reform is educating people who are incarcerated.

“In Flint and Genesee County, we started that model Sept. 8, 2020, with a program called IGNITE,” said Swanson. “If you’ve seen the increase in attention it’s gathered, not only in Michigan but around the nation, then we see what’s happening with recidivism and the idea of giving people second chances so they don’t come back as better inmates, but better people.”

Swanson said one of the reasons he attended the NSA conference last week was to speak regarding IGNITE and the department’s success with the program.

After his speech, Swanson said he had the chance to meet Hutchinson and the two talked further about the program and have announced they are now joining forces to bring IGNITE to Hennepin County.

“If people get incarcerated, we want to make sure they have the skills when they get out to do better,” said Hutchinson. “We want to get them on the right track so they can get stable housing and stable relationships. The tools we’re going to learn through IGNITE will hopefully make people better, reduce the jail population and hopefully get people to work and help our economy out.”

Sherriff’s offices across the country, he said, are doing better by changing what they do and how they do it.

“We’re not just there for punishment, we’re there to help make these people better,” said Hutchinson.

Swanson said it is exciting that Hennepin County, of all counties, is the first outside Michigan to adopt the IGNITE program. Hennepin has been in the national news this past year because Minneapolis is one of the communities there, the site of the murder of George Floyd, a Black man, by a police officer in 2020 which sparked national outrage and protests across the nation last summer.

Swanson said adding Hennepin County to the other partnerships in IGNITE, which include the UAW, the NFL Alumni Detroit, the NHL Detroit and universities and colleges around the state,

“We are going to bring it to Hennepin County, and we are actually starting it next week,” said Swanson. “It’s not as much reform as it is evolution. We evolve as law enforcement officers and I’ll tell you, it’s a beautiful thing.”

He said his goal is to get that population as low as he can and get the non-violent people out.

The county itself has a population of about 1.5 million people.