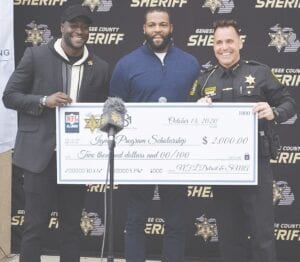 FLINT — The Genesee County Jail will be kickstarting a new scholarship avenue for inmates in the IGNITE educational program.

On Oct. 14, former University of Michigan football stars Braylon Edwards and Devin Gardner presented a $2,000 check to IGNITE on behalf of the NFL Alumni Detroit Chapter and the Sports Marketing Agency in metro Detroit. The donation will help to cover scholarship funds for inmates enrolled in IGNITE, which stands for Inmate Growth Naturally and Intentionally Through Education.

Genesee County Sheriff Chris Swanson said that the scholarship will be given out four times a year to male and female candidates who meet certain IGNITE program criteria and exhibit a “strong desire to leave the jail different than how they came.” The scholarships are intended for inmates who plan to attend Mott Community College or a trade school in Genesee County once their sentences are over.

Edwards and Gardner, who are both members of the NFL Alumni Detroit Chapter, met with Swanson around a month ago to learn more about the IGNITE program and how they could help to support it. From that point, IGNITE was able to develop a partnership with the alumni chapter and the Sports Marketing Agency— which Edwards has been an ambassador with for the past three years.

Edwards, a former NFL pro and standout wide receiver for Michigan, said that the educational programs provided by IGNITE will help to break the cycle of substance abuse and addiction that often lands inmates in prison.

“Many inmates here are caught in those phases and they don’t know how to get out of it,” said Edwards. “Education is one way they can get support.”

Gardner, U of M’s starting quarterback from 2012 to 2014, said that he’s looking forward to partnering with IGNITE to help promote one of the NFL Alumni’s main outreach goals: mental health awareness.

“A starting point for (recovering inmates) is mental health,” he said. “When the people in here (the Genesee County Jail) have something to look forward to once they get out, they’ll have hope.”

In addition to collaborating with IGNITE, the Sports Marketing Agency has partnered with several local counseling services and Community Corrections in Flint to help pave a better mental health path for ex-inmates. Sean Jordan, owner of Sports Marketing Agency, said that his company is using its pro athlete platform to destigmatize mental health and substance abuse disorders in Genesee County and across the state.

Since its official launch in September, IGNITE has had 300 students sign up for classes. Over 100 inmates have improved at least one grade level in math and/ or reading in the last 36 days, and 140 individuals have started researching post-secondary education opportunities. Four students have also completed high school equivalent credentials in the past two weeks.