SWARTZ CREEK — The Islamic Medical Association hosted its annual Fall Banquet last Wednesday to honor local doctors and educational leaders who are making a difference in the community.

Healthcare professionals and civic leaders from around Genesee County attended the gala event, which was held at the Flint Islamic Center’s Al-Rayyan Banquet Hall in Swartz Creek.

Aslam, who is in her third year of a cardiology fellowship at Beaumont Hospital, was recognized for her international medical relief work. Her efforts have included providing medical care and emergency medicine to refugees from Syria and Afghanistan, as well as participating in medical missions to aid refugees in Greece, Turkey and Bangladesh.

Aslam is a graduate of Carman- Ainsworth High School. She received her degree in medicine from Michigan State University. 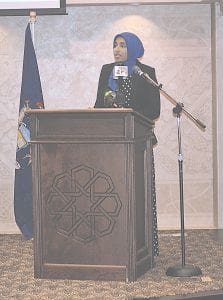 Dr. Aishah Aslam spoke about her medical work overseas and how the medical community can work to cultivate a healthier world

Aftab, a local pediatrician based in Clio, received an award recognizing a lifetime of medical service, education and leadership in the community. He is a former chairman of pediatrics at Hurley Medical Center and has been involved with raising funds for the Children’s Miracle Network.

In addition to practicing for over 50 years, Aftab is also an associate clinical professor at Michigan State. He received his medical degree from King Edward Medical University in Pakistan.

Borrego, who is entering her fifth year as chancellor of U of M Flint, was honored for her leading role in academic and economic redevelopment of downtown Flint. McMahan—president of Kettering since 2011—was given similar recognition for his efforts to revitalize the city through academic and economic means.

The evening also highlighted the contributions of Muslim physicians to the Flint area and recognized IMA’s role in helping to revitalize the community.

“Flint has suffered from a lot of bad publicity, but there is a lot of good happening in and around the city,” said IMA President Dr. Macksood Aftab. “We wanted to highlight some of the great work that is happening.”

A common theme echoed throughout the event was “Better Health for a Better Flint,” meaning that the medical community will be key to Flint’s comeback.