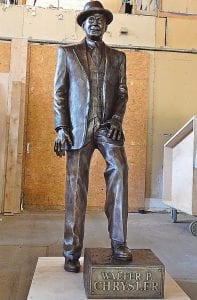 Another one of Flint’s automotive founding fathers returned to the area last week. Walter Percy Chrysler, founder of the Chrysler Corporation in 1925, returned to his automotive roots in the form of a bronze statue that is bound for permanent display at Bishop International Airport. Until the statue is ready for the official dedication in a few weeks, it is residing at Sorenson-Gross Construction Co. Chrysler’s statue is one of several commissioned by the Back to the Bricks (BTB) Automotive Pioneers Statue project and will be the first to be located outside of downtown Flint. A statue of William Durant, GM founder, is scheduled for unveiling at the Back to the Bricks Cruise Weekend Aug. 13-17. Durant will join statues of Louis Chevrolet, installed during last year’s BTB event and David Buick, installed in Dec. 2012, in a plaza on South Saginaw Street in downtown Flint. Before starting his own car company in Detroit, Chrysler worked in Flint as a president of the Buick Corporation and as an executive vice president of General Motors. To help pay for the statues, BTB collects donations via its web site at www.backtothebricks.org/statues/index.htm. 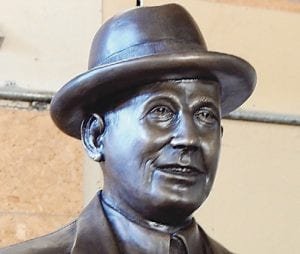