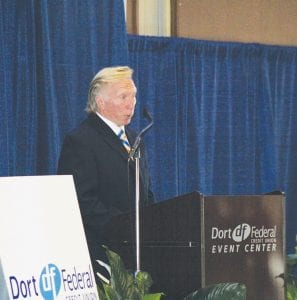 FLINT — Just like the name IMA Sports Arena, Perani Arena and Event Center is now a thing of the past. At a press conference in the arena’s lobby last Thursday, IMS Hockey, owners of the arena as well as the Flint Firebirds of the Ontario Hockey League, announced that a naming rights agreement had been reached, changing the name to the Dort Federal Credit Union Event Center.

“It’s incredible to have this opportunity to come together at this time for the rebirth of hockey in the city of Flint as we’ve been celebrating over the last few months with the Ontario Hockey League’s Flint Firebirds coming to town,” said Flint mayor Dayne Walling. “Now we have the opportunity to celebrate the rebirth of this great arena that has meant so much to our community over the years.”

The naming rights agreement’s financial terms were not made public, however, it was announced that the deal will be a 10-year partnership.

“This is another great day for Flint and Genesee County,” said IMS Hockey President Costa Papista in a press release after the press conference that drew local print and televison media and curious and interested hockey fans. “As owners and caretakers of the community’s only major event center and OHL franchise, we require a significant amount of corporate support to deliver quality events, amenities and experiences that the region can be proud to call their own.

In the fall, the arena will play host to the Flint Firebirds, who relocated from Plymouth after being purchased in the offseason. The Firebirds, however, won’t be the first franchise to call Dort Federal Credit Union Event Center home.

The facility opened in October of 1969 and has been the home arena of the Flint Spirits, Flint Bulldogs, Michigan Warriors and two incarnations of the Flint Generals hockey team, as well as Flint Fuze basketball and Flint Flames, Michigan Pirates and Flint Phantoms arena football.