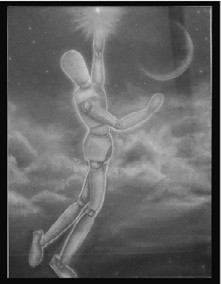 FLINT TWP. —The West Flint Business Association will present its annual $2,500 Scholarship Awards to three chosen recipients at a Special Luncheon from noon to 1:30 p.m. May 15 at Teppanyaki Grill in the Target Plaza — (former Old Country Buffet) on Miller Road. The public is invited and reservations are not required.

It will be the final meeting until fall for the business networking group which raises money all year for its three scholarships. — R.S.

The competition was open to all local high school students. An awards ceremony last week at the Flint Institute of Arts celebrated the artistic achievements of all participants and recognized the first, second and third place winners.

Nusayba finished second to winner Eric Weakley, a senior at the Saginaw Arts and Sciences Academy, whose piece titled ‘Adam and the Revelation of Good and Evil’ will be displayed for one year in the Cannon Tunnel to the U.S. Capitol along with the winners from other congressional districts across the country. — R.S.

Bowlers from across the state are coming in for the tournament, being held at Richfield Bowl, 5340 Richfield Road. It May 8 with an opening ceremony and will continue this week through May 11 and conclude next week from May 15-19.

The event is held annually around the state but it has been several years since it was played in Genesee County. Winners will be eligible to participate in the USBC National Senior Tournament in Reno in July 2014.