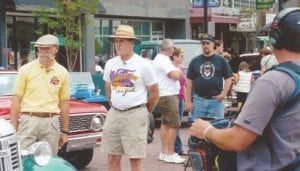 FLINT — The Back to the Bricks Promotional Tour is gearing up to hit the road, and the Flint & Genesee Convention & Visitors Bureau is hitching a ride. On June 12-16, the CVB will join a long caravan of classic cars during the Back to the Bricks 2015 Westside Promotional Tour. The annual promo tour has been held since 2010. Last year’s was the largest yet – about 160 cars

At least that many cars are expected this year since registrations are ahead of last year, said Roberta Vasilow, Events Chair for Back to the Bricks. The tour will make stops in Battle Creek, Whitehall, Manistee, Boyne City and West Branch.

“At each stop on the tour, the CVB will spread the word to car clubs and others about not just Back to the Bricks, but the all great things going on throughout Flint & Genesee,” said CVB Director Cheryl DeFrain. “What we’ve found is that if you get out-of-towners here for an event like Back to the Bricks, they love it, and they return for more of the great attractions and events we have to offer. We’re excited to join this year’s tour and help get the word out.”

The increasingly popular Back to the Bricks car show is held in downtown Flint each August. During the annual promotional road tour, usually in June, drivers cruise around the state and, sometimes, beyond, holding smaller car shows in various cities to promote the Genesee County events. In 2014, the CVB coordinated its Pure Michigan marketing and advertising efforts to reach the same areas visited by the Back to the Bricks “Michiana” Tour, which focused on parts of Michigan and Indiana.

The one-two punch paid off: Pure Michigan reported that the click-through rate from its website to the Flint & Genesee CVB website was up more than 700 percent last year.

“There’s still folks in Michigan who have never heard of the Back to the Bricks show in August,” Vasilow said, adding that the Promo Tour helps change that. “It also provides an economic impact for the cities we visit – they almost fight over having us visit them now.”

To join this year’s Westside Promotional Tour, drivers can learn more at backtothebricks.org/.

The CVB supports Flint & Genesee for all tourism needs including, but not limited to, lodging, motor coach tours, conventions, sport activities, reunions, weddings, car shows and clubs, and individual tourism.