IN FOR THE LONG RUN 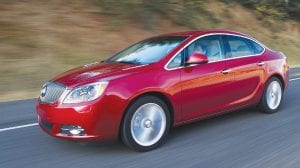 The Buick Verano outperformed every other model as the industry’s most dependable vehicle in the J.D. Power 2016 Vehicle Dependability Study.

For the second consecutive year, General Motors’ brands deliver the most segment awards in the J.D. Power Vehicle Dependability Study.

The 2016 study tracks 2013 model year vehicles in their third year of ownership.

Chevrolet delivered the most segment leaders of any industry brand, led by Malibu as the segment leader for the second year in a row in the highly competitive Midsize Car segment. Camaro ranks highest in the Midsize Sporty Car segment for the fourth consecutive year and Silverado HD ranks first in the Large Heavy Duty Pickup Segment for the second year. Equinox ranks first in the popular Compact SUV segment. 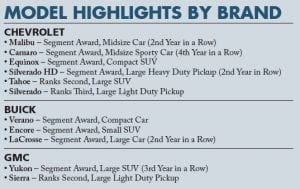 The GMC Yukon ranked first in the Large SUV segment for the third year in a row.

The Chevy Camaro ranks highest in the Midsize Sporty Car segment for the fourth consecutive year in the J.D. Power 2016 Vehicle Dependability Study.