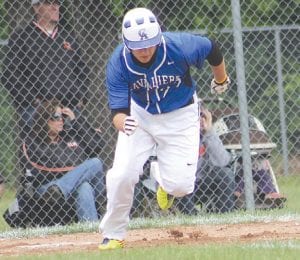 Carman-Ainsworth athletes, like Colin Heaton shown last spring, will have one less team on the schedule when Flint Northern closes at the end of the year.

FLINT — One year after adding five schools into the mix, the Saginaw Valley League will be without one of its longtime tenants when the fall season arrives. The 15-team league will be reduced to 14 teams for the 2013-14 school year after a controversial school board meeting in Flint last Wednesday resulted in the closure of one of the Valley’s oldest members, Flint Northern.

Northern, which was established at its original location in 1928, has been a member of the Valley since the school’s inception. The Vikings have produced such stars as Deanna Nolan and Mateen Cleaves, however, population loss and economic woes have sealed Northern’s fate, which is exactly what happened to their arch-rival, Flint Central, just four years ago.

“It’s too bad that the population has dwindled to the point that they have to close another high school, which we’ve been through once with Flint Central and now Flint Northern,” said Pete Ryan, director of the SVL and athletic director at Saginaw Heritage. “Obviously, economically, it’s probably what they need to do.”

Carman-Ainsworth, along with Davison, Flushing and Powers Catholic, joined the SVL this past fall after a few years of uncertainty in the dwindling Big Nine Conference. Flint Northwestern was also re-admitted to the Valley after competing independently since 2002. The latest SVL transaction, however, may bring a higher level of competition for the city.

“From the standpoint of competing in the league, it’s probably best for them, as well,” added Ryan. “Hopefully, they will be able to field teams with more kids and get more kids participating with more kids in the building.”

When it comes to scheduling in high school sports, some events, especially within the conference, are often scheduled a year or more ahead of time. When Flint Central was shut down in 2009, the Valley had to scramble to fill the dates, but this time around it appears the transition will be a bit smoother.

“Well (the closure) creates byes for all of those schools that had games with them, so it does create some issues with that,” continued Ryan. “But, at least it’s early enough that we can address it now and have some time to react to it, so that helps.”

The league is comprised of two divisions—north and south. The Genesee County schools compete in the south division, which was already one school shorter than its northern counterpart. The north consists of Bay City Central, Bay City Western, Midland, Midland Dow, Mt. Pleasant, Saginaw, Saginaw Arthur Hill and Saginaw Heritage. The loss of Northern only complicates the configuration just a bit more.

“At this point, until we have time to sit down and talk about (reconfiguration), it probably won’t change anything for next year at this point,” stated Ryan. “We’ll have to go through a year and figure out what we want to do at that point. We will probably keep the divisions as is for this year, but again, until we have the chance to sit down and talk about it, we won’t know.”

The gap in the southern division, which would be filled if not for the closures of Central and Northern, opens the door for adding a couple of schools.

“We would be open to (expansion), but you have to have teams that want to apply and come through the process,” concluded Ryan. “And so far, no one has been interested at this point.”