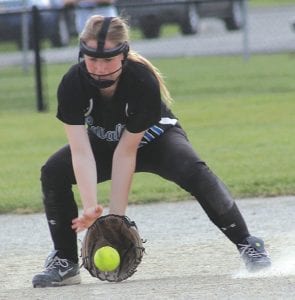 Katlyn Koegel is a strong defensive player for Carman- Aisnworth, both in the infield and outfield.

CLIO — Carman-Ainsworth drew into the easier bracket for next week’s Div. 1 softball district, but that doesn’t mean the Cavaliers are in for a stroll on the beach.

The Cavs have a first-round bye and will await the winner of Tuesday’s pre-district game between Clio and Flint Northern. They’ll most likely see the host Mustangs in the semifinals June 2, a tough assignment considering Carman- Ainsworth dropped a non-league doubleheader to Clio just nine days ago.

The other side of the bracket is even stronger. Should they get past the Mustangs and reach the district final, the Cavs will face either seventh-ranked Swartz Creek or defending district champion Flushing, 20-12. Those two teams will meet in the first June 2 semifinal at 10 a.m.

Carman-Ainsworth has struggled to a 4-25 record this spring, including an 18-game losing streak from April 16 to May 7. Clio went 8-8 in a tough Metro League race and is 18-12 overall. Flint Northern comes into the district with a 2-13 mark.

The Cavs are led by senior pitcher Keri Crane and have a capable No. 2 hurler in sophomore Jessica McClung. Katlyn Koegel is sound defensively at any position, and a strong hitter. Kinterra Tomlin and Samantha Johnston also swing a hot bat, and Kelsey Ferguson and Haley Snider know how to get on base as well.

The district champion will advance to the Saginaw Valley State University regional June 9 against the winner of the Bay City Western district.