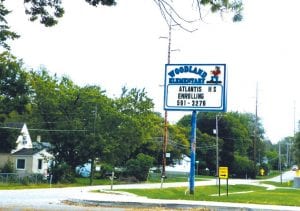 The first day of school and a new era began Monday morning for Atlantis Alternative High School, which over the summer moved into the former Woodland Elementary School at 3493 Beveridge Road. Formerly housed in a leased building on Eldon Baker Drive in Flint, Atlantis is jointly operated by the Bendle/Carman-Ainsworth Consortium and serves students in grades nine to 12 who need a smaller, more flexible learning environment than that provided at traditional high schools. Most Atlantis students are from Carman-Ainsworth but others come from districts countywide including Flushing, Swartz Creek, Grand Blanc and Flint.