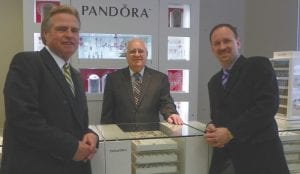 FLINT TWP. — A framed photo hanging on a wall at Gaines Jewelry captures a moment in time when owner Bob Gaines, wearing a pencil-thin tie, still had a full head of black hair.

It was 1964, within a year of Gaines opening his store at Flushing Road and Ballenger Highway. Gold cost $35 an ounce back then, compared to about $1600 ounce today.

Gaines points out a wall of gift items in the 1964 photo, which he stocked to make it seem like he had more inventory.

Similarly, each ring in the display case sits in its own box to make it seem like he had more merchandise.

“It was tough starting out.” Gaines said. “We didn’t have any funds to build inventory.”

Gaines has come a long ways since those start-up years and counts great customer service as a hallmark of the store’s longevity.

Now am ample inventory of rings are displayed in trays and the display cases are filled with all sorts of fine jewelry that is housed in a newer, larger store at 3310 Beecher Road which Gaines moved to in 1999.

The store is one of few remaining independentowned and operated jewelry stores in Genesee County and will be celebrating its 50th anniversary during the month of February, said David Gaines, company president and Bob Gaines’ son.

The anniversary celebration will include special pricing throughout the store, but the main focus will be on Gaines half-a-century in business, said Michael Goulet, store manager, who has worked there for about 37 years.

All subscribe to a philosophy Bob Gaines established from the outset: Never open on Sunday and always tell the truth.

“We have a good reputation and we enjoy it,’’ said Bob Gaines. “ It takes the same thing to stay there (successful) as it took to get there.”

Bob Gaines, 86, is retired now, but he comes to the store nearly every day to give himself something to do. He still does some watch repair, a skill he learned at a trade school, paid for under the G.I. Bill, after his service in World War II and the Korean Conflict.

“There was no such thing as a an electric watch when I was in school,'” Bob Gaines said. “Today 99 percent are battery operated.”

Watch repair still is his specialty, but Gaines realized early that he needed to include over-the-counter sales to build his business.

He came to Flint from southeast Missouri in 1955, looking to provide a better life for his wife and three children.

Bob Gaines recalled the early years of working all day and far into the night, when necessary, to fill orders due the following day.

“I opened this store a young man and became on old man. Many customers I have met along the way I consider friends more than customers.’ he said.

David Gaines said the store was voted the best place in Genesee County to buy jewelry for the past four years in a row. He also noted that the staff does not work on commission, which is unusual in the jewelry industry.

“The reason we don’t do that, when our customers come into the store, we want our sales staff to have the customers best interests in mind,’’ said David Gaines, attributing that policy as something else he learned from his father.

All repairs are done on site is another of Gaines’ customer service advantages. Being independent allows them to select a broad range of innovative merchandise, he said.

It apparently is a winning combination that has drawn customers to the store for half a century.

“We have always maintained that we help people buy, we don’t really sell,’’ said Bob Gaines.