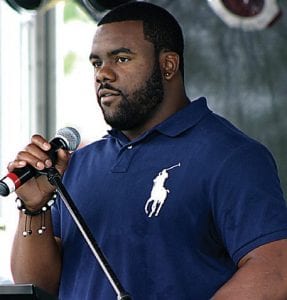 FLINT— Hundreds of area residents filed into Atwood Stadium in downtown Flint on Saturday for the first ever Men’s Health Fest. The main attraction, however, was 2009 Heisman Trophy winner, Mark Ingram. The former Grand Blanc star and Flint Southwestern Academy graduate was greeted by a multitude of fans who were already lined up in front of the tent where he was to be signing autographs. At times, the autograph line stretched from midfield all the way to the parking lot.

“Good afternoon everybody,” Ingram said as he addressed the crowd. “First of all, I would just like to say that it’s awesome to be home. It’s always great to come home and be with my family and good friends and everyone from Flint. It’s just awesome to be back home, especially for something as serious as men’s health. It’s very important for us to stay healthy.”

Ingram then began to stress how important men’s health is, especially considering most men’s attitudes toward the subject—avoidance for the most part.

“Historically, men are very reluctant to get a health checkup for various reasons including macho or unrealistic attitudes, as well as being uninsured,” added Ingram. “Men not only fail to get routine checkups or preventative care, but often ignore symptoms or delay seeking medical attention when sick or in pain. As an athlete, I know the importance of taking care of my health and seeking medical attention if I am injured, both on and off the field. But that’s not the case for the majority of the men here in Flint or across the country. So it’s very important to stay fit, stay healthy, because everyone wants to live a long, healthy life. So just be active, go work out, just walk even if you have to. Go to your doctor for regular checkups; it’s just very important.”

The New Orleans Saints’ star also spoke of helping out in the community, especially in areas that have helped you become who you are.

“Just as important as men’s health, I think it’s important to give back in the community,” commented Ingram. “That’s why I started the Mark Ingram Foundation. We’ve been real active in the communities in Flint, New Orleans and even in Alabama. I’d like for you guys to support my foundation. Go Flint, Roll Tide and go Saints.”

Several tents were set up all over the turf to help promote the message behind the Men’s Health Fest, with different health related activities taking place at each one. There was even a small train that carried the children across the stadium to the various stations, including a play area for the kids, as well as a part of the field that was designated for games of tug-of-war.

There was also an Army booth set up for those who may be interested in a future in the military, and the Flint Fury semi-pro football team brought out a few of it’s players to promote the team and get to know the people of the community, despite being just hours from kickoff of their game against the Flint Rampage in Fenton.