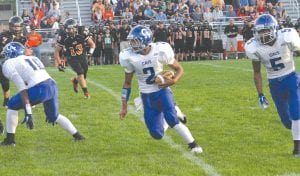 FLUSHING — Carman-Ainsworth played defense like it was on a mission last Friday. Apparently, the Cavaliers were on a mission.

Coach Nate Williams wouldn’t reveal the details, but Carman was extra motivated in its Big Nine Conference football opener against Flushing, and it showed in a 21-0 victory over the Raiders. The Cavs improved to 1-2 overall.

“The defense was inspired,” said Williams. “They had some personal things going on early in the week and they were playing for someone. The defensive line played outstanding, and the defense as a whole played together. They were running to the ball and everybody was flying around. I was really proud of the way they played.”

The shutout was only the second for Carman in the last five seasons, and the defense even got in on the scoring, although none of it counted. Malik Seales’ fumble return for a touchdown on the third play of the game was called back for defensive holding, and Brandon Walker’s interception return for a score in the fourth quarter also was negated by a penalty.

Shane Barron handled most of the scoring and the offense, rushing for 152 yards and a touchdown on 11 carries and turning a short pass into another long touchdown play. Lorenzo Redmond scored the Cavs’ other touchdown, and Connor Storms added all three extra points.

Carman didn’t score until late in the first half, as Flushing kept the speedy Barron in check much of the time. Barron split time at quarterback and running back, with Storms taking over at quarterback.

But Barron broke loose for a 62-yard run to the Flushing five-yard line, then scored on the next play to give Carman a 7-0 lead with 3:08 left in the half.

The Cavs made it 14-0 early in the second half when Barron took a swing pass from Storms and zipped 59 yards down the left sideline for a touchdown just 1:07 into the third quarter.

Carman sealed it in the fourth when Redmond scored on a 40-yard run to make it 21-0.

The Cavs are back home this Friday to take on Powers Catholic, which also is 1-2 and 1-0 in the Big Nine. Williams will see a familiar face on the opposite sideline in Powers coach Bob Buckel, who used to coach Flushing. The two split close games against each other in 2008 and 2009.

“A Bob Buckel-coached team is always going to be a great challenge,” Williams said. “Our games always went down to the wire. This will be another great game, and those are the type of games you want.”