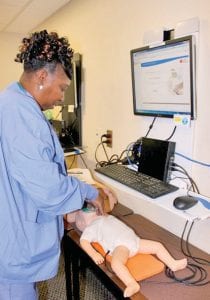 Pamela Coleman, NA, who works in a surgical care area at McLaren Flint, was the first person to use the HeartCode® system on March 1; the day it officially became the new BLS, ACLS training tool at the hospital.

FLINT — Thanks to advances in technology, employees at McLaren Flint are experiencing a new way of testing their basic and advanced cardiovascular life support skills. Called HeartCode®, this technology based learning tool was created by the American Heart Association (AHA).

As of March 1, all employees at McLaren Flint who are required to participate in either the ACLS or BLS testing will be using the HeartCode system. The hospital is the first in the area to adopt the technology.

“We are pleased to offer this new training system to staff,” states Tammie Rubel, RN, Director of Education at McLaren Flint. “Staff that has used the system already, like the interactive portion of the program, and AHA research shows hospitals that have implemented the training have significantly improved patient outcomes.”

HeartCode is a Web-based, self-paced instructional program that uses eSimulation technology to allow students to assess and treat patients in a virtual healthcare setting. Students apply their knowledge to real-time decision making and skills development. Computerized debriefings are provided immediately after each simulation to facilitate learning. After completing the cognitive portion of the course, staff practices and tests its skill with a voice-assisted manikin system, in a designated testing suite. — G.G.