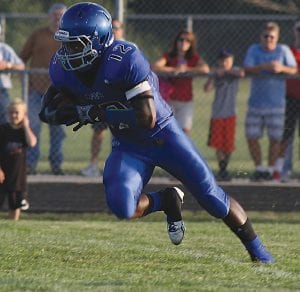 Carman-Ainsworth’s Demarion Allen sprints down field during a kickoff return.

FLINT TWP. — Carman- Ainsworth got off to a slow start offensively, but scored two touchdowns in the second half and rode its defense to a 13-0 win over Grand Blanc in the football season opener last Thursday at home.

Jevonte Alexander intercepted two passes, returning the first one 19 yards for a touchdown with 11:05 left in the third quarter and taking the second one 49 yards to set up the second score. Senior quarterback Connor Storms carried it in from the 5-yard line with 10:17 left in the game, as the Cavaliers won their second straight season opener against the Bobcats.

Carman-Ainsworth managed just 159 total yards and nine first downs while losing three fumbles. But the Cavs held the Bobcats to 210 yards and never let them inside the 20 until the final four minutes. Grand Blanc reached the 3-yard line with 1:49 left but ran out of downs.

“Like any first game, the defense is a little ahead of the offense,” he said. “I’d like to see our guys do things better, but as long as we improve each week, we’re going to be okay.”

Storms hit 4-of-11 passes for 39 yards and the Cavs totaled just 120 yards on the ground. Nate Williams Jr. led the rushing attack with 36 yards on four carries, and Alexander had 30 yards on four tries. Lorenzo Redmond ran 10 times for 27 yards and Storms gained 26 yards on 17 carries.

“There was some lack of execution and some assignments that were missed,” said Williams. “We’ll correct those things and get better. We’re glad to have the win, but we know we have to do some things better to have a strong season.”

Carman-Ainsworth will visit Saginaw Heritage this Friday in a Saginaw Valley League crossover game. The Cavs beat the Hawks, 45- 7, last year, but Heritage is improved.

“They were young last year and they’re definitely better,” Williams said. “They’re an explosive team that’s going to run the football. We have to fend off their blocks, run to the football and make the tackle. They’re 1-0 and we’re 1-0. We have to come to the game prepared, strap it on and play hard.”