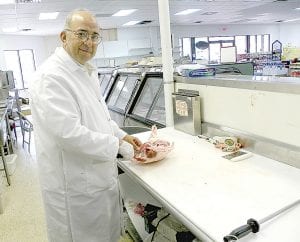 Mohamed Doleh, the butcher, demonstrates how meats are cut fresh while you wait using the Halal method at the new Hala Beco market on Corunna Road.

FLINT TWP. — Welcome is the word for the Hala Beco international grocery store that opened about two weeks ago in JO-JO’s Plaza, 3236 Corunna Road.

Hala Beco, which means “welcome you’’ in Arabic, extends to a variety of cultures and nationalities that the market’s owners hope to cater to, said Ryan Abuaita of Swartz Creek, spokesperson and son of one of the owners.

For example, the tea shelf is laden with Arabic, Chinese, Egyptian, English and Lipton products – something for every taste.

The 6,600 square-foot store is amply stocked with recognizable brands such as Domino Sugar, Jell- O gelatin and Cheerios cereal but also offers specialty products, many with foreign labels.

“We try to have things from each country,’’ Abuaita said, adding that they make bulk buys on many items and pass the savings on to customers.

The store currently is offering special buys on cans of chickpeas and fava beans for Ramadan, a holy month of fasting observed by Muslims that began Monday and ends August 31. Abuaita will helpfully supply the ingredients for making hummus. 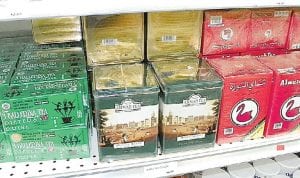 Teas including Arabic, Chinese, Egyptian, English and regular Lipton are sold at the new Hala Beco market on Corunna Road.

Hala Beco tries to fill special requests from customers such as the fresh figs now available in the produce section. Also the spices section has doubled because of customer requests, Abuaita said.

Fouzi Zerka of Grand Blanc, a customer who stopped by last week, bought kusa, an Arabic squash; grape syrup, cheese and other produce.

“It’s worth it (the drive from Grand Blanc),’’ Zerka said.

Another store specialty is meats, fish, lamb, beef and chicken prepared by the Arabic halal method in keeping with Islamic dietary laws.

“He (the butcher) brings it from the back (freezer) and cuts it in front of you,’’ Abuaita said.

The store is open for business but still a work in progress.

Abuaita said it took three months to strip and paint the floors because of adhesive residue when the old carpet was taken up.

Built in 1991, the building originally housed a video store and after that a wig and beauty supply store.

Other plans are to open a bakery eventually in a 1,000 square foot store they have purchased next door and currently use for storage.

The plaza site was chosen because it is centrally located on a busy main street not far from the freeway (I-75) and has surrounding neighborhoods, Abuaita said.

His family also owns area liquor stores but will not sell it at the grocery store, he said.