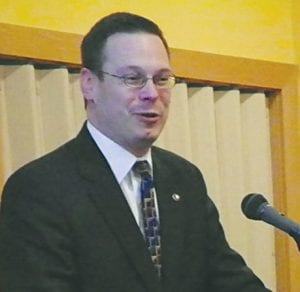 Create a plan and stick to it is one piece of advice from Steve Schiestel, chief investment officer for Citizens Bank Wealth Management, who spoke last week to the West Flint Business Association.

Likening investments to making New Year’s resolutions, Schiestel said most investors start off with good intentions but get sidetracked.

Hoping to beat the market, many investors stray from that plan and invest time and attention in misleading factors such as analyst reports, investment blogs, financial gurus, economic statistics, mutual fund return rates and more, he said.

Studies show that over a 20-year period from roughly 1992 to 2011, the average investors rate of return did not keep up with inflation, Schiestel said.

He attributed that low rate of return to three factors – misguidance by the media, investment experts and investors personal beliefs and behavior.

Schiestel showed several historical examples of times when actual market performance was the opposite of forecasts by articles published in various leading national business magazines.

Paying attention to dire headlines scared investors away from a return rate as high as 29 percent from roughly 1988 to 1990 was one example he gave.

He cited several others.

Going all the way back to 1974, investors scared off by political and financial turbulence chronicled in business media missed out on a16 percent return on investment over the next ten years he said.

Back in late 1987, a 22 percent one-day plunge in Dow Jones Industrial Average in October, fueled headlines and fears that another Depression was brewing.

Nervous investors missed out on 19 percent return over the next ten years, he said.

“The key to making money in stocks is not to get scared out of them,’’ Schiestel said, quoting Peter Lynch who for many years was a very successful investment manager for the Fidelity Magellan Fund.

Schiestel also gave numerous examples of market performance based on advice given by major investment gurus including Alan Greenspan, former chairman of the U.S. Federal Reserve, that did not bear out over the long haul.