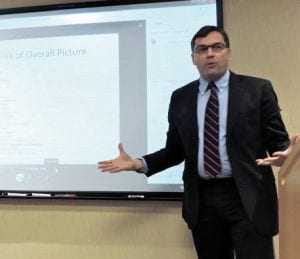 Martin Lavelle, left, business economist for the Federal Reserve Bank of Chicago/Detroit presented a 2017 outlook for Michigan at Baker College-Flint.

FLINT TWP. — Two Federal Reserve economists painted an upbeat 2017 economic outlook for Michigan but some audience members questioned whether that forecast applies to the Flint area.

Based on several indicators such as retail sales, housing starts, the unemployment rate and the rate of inflation, they said indications are that Michigan is keeping pace with national statistics or ahead in some cases.

“The Michigan economy is going to grow for the eighth straight year,” Lavelle said, adding that is based on a consensus from various sources.

In summary, Lavelle forecasts that the Michigan economy will grow but at a slightly slower pace than the nation; auto sales levels will reach near peak; vehicle and furniture production will be at or near peak levels; the housing market should continue to improve; the labor market will tighten but income gains will be more widespread; and capital investment will reach a tipping point.

To keep the national economy on a balanced keel, the Federal Reserve Bank targets a 2.0 inflation rate which is how edging up to about 1.7 percent, Traub said.

On the Michigan job front, wage and salary growth is strong, part-time employment is dropping, long-term unemployed percentages are decreasing. The western side of the state (Grand Rapids, Kalamazoo) has the lowest unemployment rate at about 3.7 percent compared to about 3.9 percent in mid-Michigan (Jackson, Lansing), 4.5 in the tri-cities (Flint, Saginaw, Bay City) and about 5.7 in southeast Michigan (Detroit, Ann Arbor).

Lavelle elaborated that while Grand Rapids’ unemployment rate is the lowest at about three percent, the Flint area still is relatively high at about 9.8 percent, Saginaw at 9.1 percent and Detroit at about 11.7 percent. It comes as no surprise that unemployment is lower in western Michigan because that has been the fastest growing area since the last recession, Lavelle said.

Data presented on housing values and unemployment rates led one person in the audience to question the overall outlook for the Flint area compared to the state as a whole. “I am not seeing evidence of improvement in Flint,” he said, noting the aggregation of state and local data presented. ”Is this causing you to miss what is really happening?” Lavelle and Traub agreed that Flint data skews higher as noted by the difference in unemployment rates. Questioners asked for advice on what can be done to improve Flint-area stats. Traub noted that the Federal Reserve Bank does not set policy which is up to local governments. He said they try to encourage dialog among economic stakeholders to come together to brainstorm ways of improving the local economy through means such as job training and expansion, construction, tax rates and infrastructure improvement.

More of Lavelle’s insights on the Michigan and Midwest economy, including transformation of urban areas, can be read online on his blog at michiganeconomy. chicagofedblogs.org/