Is Flint Twp. one of the “Most Dangerous Cities in Michigan”? 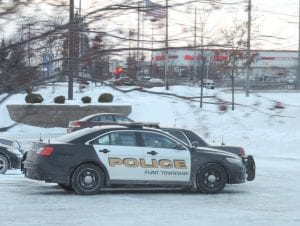 Of 186 places in Michigan, Flint Township ranked as one of the least safest, according to the “2015 Safest Cities in Michigan Study” by ValuePenguin.

New York-based ValuePenguin is a financial advice website, specializing in research and analysis to help consumers make better financial decisions such as choosing credit cards and insurance plans, according to its web site. It also issued similar safest cities reports for other states.

Last year, a similar crime ranking report, “10 Most Dangerous Cities in Michigan” was disseminated by Home Security Shield, a company whose commercial interest is selling “affordable home security monitoring systems.” That report ranked Flint Township as the third most dangerous city in Michigan, second only to No. 1 Flint and No. 2 Detroit.

“It is another reminder of the need to improve the provision of law enforcement in Flint Township,” he said. “This should include returning our staffing levels to 45 officers. For 2015, Flint Township has budgeted for 40 police officers. The Police Department is working hard to fill seven open positions. We anticipate being budgeted for 45 by next year.”

The assigned values are arbitrary but help Flint Township because of its high property crime rate, Chief Sippert said. He also noted the rankings for other municipalities in Genesee County — notably Burton and Mt. Morris Township — indicate a “regional crime problem.”

“Flint Township works closely with other law enforcement agencies to address crime,” Chief Sippert said. “Additionally it is imperative that some of the regional approaches to this crime issue continue. Specifically the funding for the Flint City Lock Up. State funding for the lock up is vital, not just to address crime in the City of Flint, but also the regional crime issue that spreads to Flint Township and the surrounding communities.”

Thetford Township at the far north end of Genesee County finished 5th on ValuePenguin’s list as one of the safest places in Michigan. Flushing ranked 23rd and other county areas finished somewhere in the middle.

Here’s how Flint Township compared to some nearby areas, according to ValuePenguin’s findings:

ValuePenguin said its findings are based on data collected from 2013 FBI crime statistics, the most recent data available.

“We excluded towns with populations less than 5,000 because towns with smaller populations than that are much more sensitive to crime score fluctuations for fewer crimes committed,’’ ValuePenguin stated in its methodology explanation. “The raw data report included violent crimes (murder/manslaughter, forcible rape, robbery, and aggravated assault) and property crimes (burglary, larceny theft, motor vehicle theft, and arson) from all law enforcement agencies that participate in the FBI Uniform Crime Reporting program.

“We standardized the data to reflect violent and property crimes per 100k, to account for population. We then aggregated a “crime score.” In order to calculate this, we weighted violent crime at 90% and property crime at 10%; though property crime is far more prevalent, we figured that the violent crime data points are more relevant when calculating the relative safety of these cities. To account for the fact that smaller cities with very slight upticks in crime are penalized more severely, we then applied a logarithm to the population and multiplied it by that number to arrive at our “crime score.”