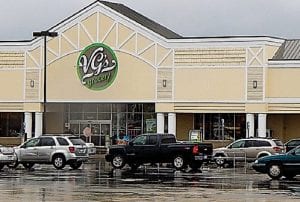 Owners have yet to confirm reports by reliable sources that this VGs grocery store on Corunna Road is among those closing at the end of the year.

FLINT TWP. — Management is not talking but signs are pointing to the closing of VGs grocery store, 5080 Corunna Road, by the end of the year.

Last week, Spartan filed a Worker Adjustment and Retraining Notification (WARN) for the VGs store on Court Street in Burton and another in Shelby Township outside of Detroit.

WARN notices are required by federal law to give advance notice of permanent job losses due to business closures or mass layoffs.

The Spartan Stores notice gave a Dec. 28 closing date for the Burton and Shelby Township stores.

As of Friday, Nov. 8, no WARN had been filed for the Corunna Road VGs store but does not mean there won’t be, according to Lloyd Conway, State Coordinator/Program Specialist at Workforce Development Agency, for the State of Michigan. WARN notices must be filed 60 days before the stated termination date but are not required of businesses with 50 or fewer full-time employees, Conway said. He could not be reached for an update before press deadline.

Spartan Stores management did not respond to several requests for confirmation that the Corunna Road store is among those to be closed but VGs affiliates including employees and tenants are saying publicly they have been given notice.

If VGs in Flint Township is in fact closing, it will be the second time within 10 years that the 60,000 square-foot store has been shuttered. It formerly operated as a Farmer Jack grocery store that closed in 2005.

VGs, then operating as a Fenton-based, family-owned chain of stores, purchased the Corunna Road site in 2006 and invested about $350,000 in renovations. Spartan Stores bought the VGs chain in 2008.

Spartan Stores is now in the process of merging with Minnesota-based Nash Finch Company, according to filings with the U.S. Securities and Exchange Commission (SEC).

Spartan Stores has announced a shareholders meeting on Nov. 18 seeking approval of the proposed merger with Nash-Finch, according to SEC filings.

Spartan Stores and Nash Finch announced the pending merger on July 22 and expect to complete the transaction before the end of calendar year 2013, according to a press release on the Nash- Finch website.